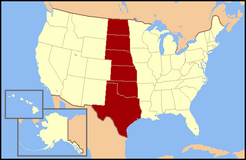 Frontier Strip states are in red.

The Frontier Strip refers to the six states in the United States forming a north-south line from North Dakota to Texas.

The term Frontier Strip is correlated to the 1880 census, where these six states, some of which were territories at the time, were part of the "Frontier Line," sometimes taken to be the 100th meridian west, the geographic designation by the U.S. Census Bureau that proclaimed where the civilization of the Eastern United States ended and the historic American Wild West began. In the 1890 census, it stated, "Up to and including 1880 the country had a frontier of settlement, but at present the unsettled area has been so broken into by isolated bodies of settlement that there can hardly be said to be a frontier line. In the discussion of its extent, its westward movement, etc., it can not, therefore, any longer have a place in the census reports."

The modern states included in the frontier strip are:

The Frontier Strip has been one of the most reliably Republican regions of the United States. It was one of the few parts of the country where Republicans had any electoral success during the heavily Democratic years of the Great Depression. The exception to this general rule however could be found in Texas and Oklahoma, both of which were counted as part of the Democratic Solid South for most of the 20th century. The last Democratic presidential candidate to win one of those six states was Jimmy Carter, who won Texas in United States presidential election, 1976.

Although sharing contiguous boundaries, a common frontier era, and many characteristics generally regarded as "western", the states of the Frontier Strip are not usually classified as a true historical/cultural region in their own right. Texas and Oklahoma are often regarded as part of the South or Southwest, while those to the north are generally grouped with the Midwest. None are part of the West today as defined by the U.S. Census Bureau.

The climate of the Frontier Strip states varies considerably, both north to south and east to west. In the northern parts, a humid-continental climate (warm summers, cold winters) prevail, while a humid-subtropical (hot summers, mild winters) is the general rule in southern sections. In the far western areas of all of these states, semi-arid conditions exist. This is characterized by relatively low amounts of rainfall, although the average monthly temperatures will vary considerably from north to south. Perhaps the most notable weather feature of the Frontier Strip states is its reputation for violent weather.

Many of these states make up a large portion of what it often referred to as Tornado Alley. The combinations of warm humid air from the southeast and proximity to the cold fronts coming in from Canada or the far western United States. along with a natural humidity boundary known as a dry line, make it prime ground for being the most tornado-prone region in the world. Kansas, Oklahoma, and Texas alone account for a third of all recorded tornadoes in the United States, and parts of the same are often referred to as the "heart of tornado alley."

All content from Kiddle encyclopedia articles (including the article images and facts) can be freely used under Attribution-ShareAlike license, unless stated otherwise. Cite this article:
Frontier Strip Facts for Kids. Kiddle Encyclopedia.