Gap Mountain is a 2,675-metre (8,776-foot) mountain summit located at the southern end of the Opal Range in the Canadian Rockies of Alberta, Canada. Its nearest higher peak is Elpoca Mountain, 2.0 km (1.2 mi) to the east. Gap Mountain is situated 5.0 km south of Mount Wintour, within Peter Lougheed Provincial Park. Gap Mountain is a conspicuous peak seen from Alberta Highway 40 at Highwood Pass. It is a popular climbing destination because it offers interesting, exposed scrambling on its eastern flanks with excellent summit views of Kananaskis Country.

George Pocaterra named it for its location at the gap between the Opal Range and Elk Range. The mountain's name was officially adopted in 1978 by the Geographical Names Board of Canada. 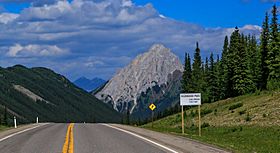 Gap Mountain is composed of limestone laid down during the Precambrian to Jurassic periods. Formed in shallow seas, this sedimentary rock was pushed east and over the top of younger rock during the Laramide orogeny. Gap Mountain was created during the Lewis Overthrust. The steeply tilted strata are virtually the same in each peak of the Opal Range, with softer layers sandwiched between harder layers. 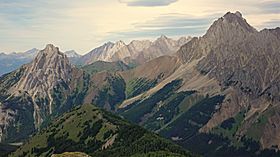 Based on the Köppen climate classification, Gap Mountain is located in a subarctic climate zone with cold, snowy winters, and mild summers. Temperatures can drop below −20 °C with wind chill factors below −30 °C.

In terms of favorable weather, June through September are the best months to climb Gap Mountain.

Precipitation runoff from the mountain drains into Pocaterra Creek, a tributary of the Kananaskis River.

All content from Kiddle encyclopedia articles (including the article images and facts) can be freely used under Attribution-ShareAlike license, unless stated otherwise. Cite this article:
Gap Mountain (Alberta) Facts for Kids. Kiddle Encyclopedia.