The Geoffroea decorticans or Chañar is a small tree in the pea family, Fabaceae. It is found in very arid places of southern South America. It is a deciduous tree that loses its leaves in winter with the cold and also in summer if it gets too dry. 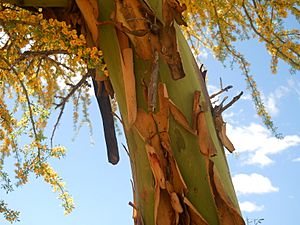 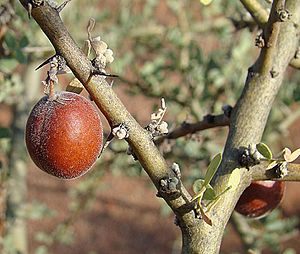 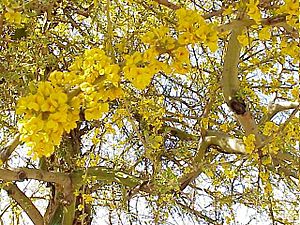 The trunk of Geoffroea decorticans grows vertically when grows alone but the plant looks like a shrub when it grows inside the forest. The tree grows up to 3–10 m (9.8–32.8 ft) tall.

The trunk could have up to 40 cm (16 in) in diameter, with yellow bark that peels off, revealing the underneath young green bark. The plant has many branches and many leaves, and the tree have a rounded look in its upper part.

The flowers are very visible, small, papery and yellow-coloured. The tree produces flowers in spring (September to October, in the Southern hemisphere), either singly or in groups ("clusters)", and produces fruits from November to January.

Geoffroea decorticans is unique among legumes in that it produces fleshy, oval pods that hold a single seed. Fruits are initially green but turn deep orange as they mature.

The second name of the species, decorticans, means that the bark of the trunk peels off.

Common names for this tree are chañar, Chilean palo verde and kumbaru.

The species have the following synonyms:

The chañar grows from sea level up to 2,300 m (7,546 ft) above sea level. In Chile, it grows in the Arica and Parinacota, Tarapacá, Antofagasta, Atacama and Coquimbo regions, and grows in groups called Spanish: chañarales, in plural (Spanish: chañaral in singular).

Geoffroea decorticans is an average tree with a wood moderately hard and dense, good for carpentry and furniture making. It is also used as firewood and to make cheap posts (tall sticks) for fences.

The fruits are sweet and can be eaten, as well as the seeds; both are used as human and animal feed. The fruits are very commonly used for both cooking and medical purposes in the processed form of chañar molasses.

Because they produce many bright, yellow flowers, Geoffroea decorticans is also used as ornamental plants.

All content from Kiddle encyclopedia articles (including the article images and facts) can be freely used under Attribution-ShareAlike license, unless stated otherwise. Cite this article:
Geoffroea decorticans Facts for Kids. Kiddle Encyclopedia.