Geography of Melbourne facts for kids 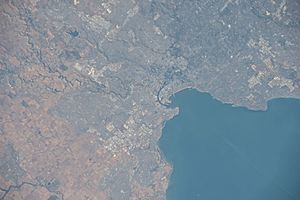 Satellite view of the Greater Melbourne area, showing Port Phillip Bay opening to the Bass Strait and surrounding plains of the city limits. 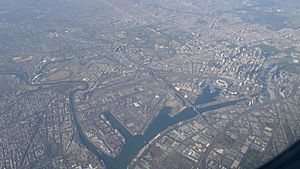 Aerial view of the city and inner-city surrounds, with the Yarra River traversing through the city centre (the cluster of buildings on the far right) 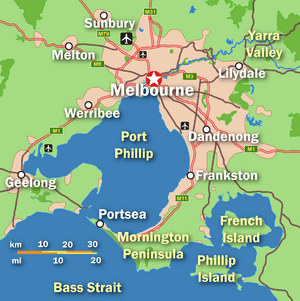 Melbourne, the capital city of Victoria, Australia, is situated on the southeastern fringe of the Australian landmass and in the southern central part of the state. Melbourne covers an urbanised area (generally excluding nearby rural areas) of approximately 2,453 km²–larger than that of Sydney, Greater London and Mexico City, with population density roughly around 16 people per hectare on average

The city itself is situated in a region of alpine forests known as the High Country. The city and metropolitan areas of Melbourne also spans along the lower stretches of the Yarra River. Towards eastern Melbourne is the low-lying mountain ranges known as Dandenong Ranges, 35 km east of the city.

Geologically, it is built on the conclusion of Quaternary lava flows to the west, Silurian mudstones to the east, and Holocene sand accumulation to the southeast along Port Phillip. The southeastern suburbs are situated on the Selwyn fault which transects Mount Martha and Cranbourne. 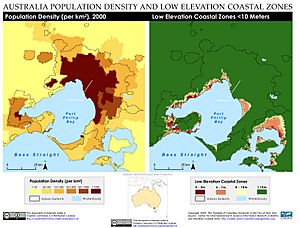 Melbourne extends along the Yarra River towards the Yarra Valley and the Dandenong Ranges to the east. It extends northward through the undulating bushland valleys of the Yarra's tributaries—Moonee Ponds Creek (toward Tullamarine Airport), Merri Creek, Darebin Creek and Plenty River—to the outer suburban growth corridors of Craigieburn and Whittlesea.

The city reaches south-east through Dandenong to the growth corridor of Pakenham towards West Gippsland, and southward through the Dandenong Creek valley, the Mornington Peninsula and the city of Frankston taking in the peaks of Olivers Hill, Mount Martha and Arthurs Seat, extending along the shores of Port Phillip as a single conurbation to reach the exclusive suburb of Portsea and Point Nepean.

Melbourne's major bayside beaches are located in the south-eastern suburbs along the shores of Port Phillip Bay, in areas like Port Melbourne, Albert Park, St Kilda, Elwood, Brighton, Sandringham, Mentone and Frankston although there are beaches in the western suburbs of Altona and Williamstown. The nearest surf beaches are located 85 kilometres (53 mi) south-west of the Melbourne CBD in the back-beaches of Rye, Sorrento and Portsea.

All content from Kiddle encyclopedia articles (including the article images and facts) can be freely used under Attribution-ShareAlike license, unless stated otherwise. Cite this article:
Geography of Melbourne Facts for Kids. Kiddle Encyclopedia.