George Cadwalader (May 16, 1806 – February 3, 1879) was a general in the United States Army during the Mexican–American War and American Civil War.

Cadwalader was born and raised in Philadelphia. He studied law and was admitted to the bar. He served in the Pennsylvania state militia and suppressed anti-foreign riots in Philadelphia.

His father was Thomas Cadwalader, not to be confused with his cousin Thomas McCall Cadwalader (1795–1873), who was a general from New Jersey. His mother was Mary Biddle, who was the daughter of Clement Biddle, (1740–1818) who served in the American Revolutionary War.

He married Frances Butler Mease in 1830. They had one daughter, Frances, who died young.

While holding this position, he was criticized for his weak role in the Philadelphia anti-Catholic riots of 1844. Cadwalader refused to allow the militia to take action as rioters destroyed the Irish-Catholic neighborhood on Kensington in May 1844. When he did call out the militia five days after the violence began, his troops primarily stood as observers and did not actively try to suppress the riots. Cadwalader argued that he could not do so without express order from the governor. As a result, state law was changed several years later to permit emergency action without express approval from the governor.

In July of that same year, during three days of rioting in Southwark, a largely Catholic neighborhood in South Philadelphia, Cadwalader ordered his troops to fire into the crowd of nativists trying to destroy St. Philip Neri Church. The street battle resulted in the deaths of twelve rioters and two militiamen, with many more injured. These actions resulted in concern over the use of the military against civilian populations and led directly to the creation of a much stronger and more professional police force in Philadelphia.

In 1845, Cadwalader was elected an honorary member of the Pennsylvania Society of the Cincinnati.

On March 3, 1847, Cadwalader was appointed brigadier general and took command of a brigade of reinforcements being sent to Winfield Scott in central Mexico. His unit was designated the 2nd Brigade in the newly formed 3rd Division under Gideon Pillow. He participated in the battles of Contreras, Churubusco, and Chapultepec. For his services at Chapultepec, he was brevetted major general in the Regular Army, to rank from September 13, 1847.

Cadwalader was an original member of the Aztec Club of 1847 and was honorably discharged from the Army on July 20, 1848. 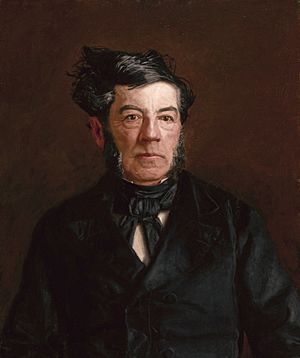 Portrait of Cadwalader by Thomas Eakins

When the Civil War broke out, Cadwalader immediately volunteered his services to the Union cause. Due to his distinguished military experience, he was appointed major general of Pennsylvania Volunteers by Governor Andrew Curtin in April 1861.

On May 15, he was appointed military commander in Maryland, where Union communications were being threatened by local Confederate sympathizers. On May 25, he ordered the arrest of John Merryman, who had been recruiting soldiers for the Confederate army. When Chief Justice Taney issued a writ of habeas corpus for Merryman, Cadwalader ignored him, stating that he was authorized by the President to suspend habeas corpus. This dispute resulted in the important case of Ex parte Merryman.

In April 1865, General Cadwalader helped found the Military Order of the Loyal Legion of the United States (MOLLUS), a quasi-fraternal organization for former Union Army and Navy officers. He was a member of the Pennsylvania commandery and received MOLLUS insignia number 60. He served as Commander-in-Chief of the Loyal Legion from its founding until his death.

Cadwalader died in Philadelphia on February 3, 1879.

All content from Kiddle encyclopedia articles (including the article images and facts) can be freely used under Attribution-ShareAlike license, unless stated otherwise. Cite this article:
George Cadwalader Facts for Kids. Kiddle Encyclopedia.