Gordon was born in Charlestown, Massachusetts. He moved to Framingham, Massachusetts, at the age of five with his widowed mother. He graduated from the United States Military Academy in 1846, 43rd in a class of 59 cadets. He served under Lt. Gen. Winfield Scott in the Mexican–American War, earning the brevet of first lieutenant for gallantry at Cerro Gordo. He resigned from the army in 1854. After taking a course in the Harvard Law School, he practiced law in Boston. 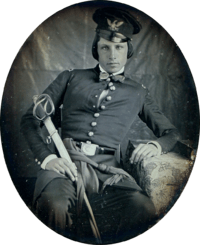 When the Civil War erupted in 1861, Gordon organized and became colonel of the 2nd Regiment Massachusetts Volunteer Infantry. The regiment served guarding the upper Potomac River and Frederick, Maryland, and in the spring of 1862, Gordon served under Maj. Gen. Nathaniel P. Banks, unsuccessfully opposing Maj. Gen. Stonewall Jackson in the Shenandoah Valley. Gordon was appointed a brigadier general of volunteers on June 12, 1862, to rank from June 9, 1862.

Gordon commanded a brigade in XII Corps, Army of the Potomac, at the Battle of Antietam, becoming acting division commander when Brig. Gen. Alpheus S. Williams became acting corps commander. He also took command of 1st Division, XI Corps, following the Battle of Gettysburg and was transferred with it to the Department of the South. There he commanded troops on Folly Island, South Carolina. Starting in November 1864, Gordon served in the Department of Virginia. He commanded the Eastern District of that department from February 1865 until he left the army.

Gordon served in the army until August 24, 1865. On January 13, 1866, President Andrew Johnson nominated Gordon for the award of the honorary grade of brevet major general, United States Volunteers, to rank from April 9, 1865, and the U.S. Senate confirmed the award on March 12, 1866.

After the war, Gordon practiced law in Boston. He was one of the founders of the Military Historical Society of Massachusetts. He published the following books:

All content from Kiddle encyclopedia articles (including the article images and facts) can be freely used under Attribution-ShareAlike license, unless stated otherwise. Cite this article:
George Henry Gordon Facts for Kids. Kiddle Encyclopedia.