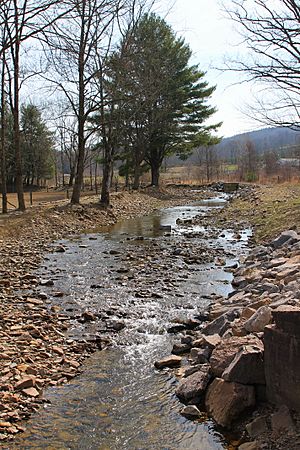 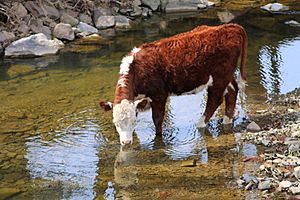 A cow in German Run

A reach of German Run is designated as an impaired waterbody. The causes of the impairment are organic enrichment/low dissolved oxygen and sedimentation/siltation. The likely source of the impairment is agriculture. Part or all of an unnamed tributary known as Unt 19501 is also impaired, with the same causes and probable source.

The designated use of German Run is aquatic life. The stream is classified as a Coldwater Fishery and a Migratory Fishery.

In 2011, Chief Gathering, LLC. received a permit to built, maintain, and operate a 12-inch (30 cm) natural gas pipeline crossing several unnamed tributaries of German Run. In 2015, XTO Energy was fined $95,753 after casing and cementing problems in two of its natural gas wells in the area caused surface expressions of methane in German Run and Little Muncy Creek, as well as impacting seven private water wells.

All content from Kiddle encyclopedia articles (including the article images and facts) can be freely used under Attribution-ShareAlike license, unless stated otherwise. Cite this article:
German Run Facts for Kids. Kiddle Encyclopedia.