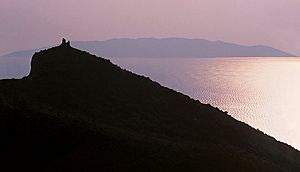 Giglio Island (Italian: Isola del Giglio) is an island and Italian commune located in the Tyrrhenian Sea, off the coast of Tuscany, part of the Province of Grosseto,and part of Tuscan Archipelago

The island is separated by a 16 km stretch of sea from the Argentario promontory: mainly mountainous, it is almost all granite with the highest point the Poggio della Pagana (496 m). 90% of its surface is covered by Mediterranean vegetation alternating with large pine forests and numerous vineyards which enable the production of the famous "Ansonaco" wine. The coast is 27 km long, made up of rocks, of smooth cliffs and several bays: Arenella, Cannelle, Caldane and Campese, the biggest one with its little village of the same name.

A beach on Giglio Island, with a view of Mount Argentario on the Tuscanian coast.

The modern island was probably born 4.5 - 5 millions years ago, and people have lived there since the Iron Age. Later it was probably an Etruscan military stronghold. Under the Romans it was an important base in the Tyrrhenian Sea, written about, for example, by Julius Caesar in his De Bello Gallico and by the poet Rutilius Claudius Namatianus.

In 805 it was given by Charlemagne to the abbey of the Tre Fontane in Rome, and was later a possession of Aldobrandeschi, Pannocchieschi, Caetani, Orsini families and the town of Perugia. In 1241 the Sicilian fleet of Emperor Frederick II destroyed a Genoese fleet. From 1264 Giglio was a Pisane dominion, from which it passed to the Medici. It suffered several Saracen attacks, which ended only in 1799.

Alongside its history the island was always renowned for its mineral resources: many columns and edifices in Rome were built with the Gigliese granite.

How the island was

The island has the remains of a Roman villa of Domitius Ahenobarbus (1st-2nd centuries), in the area of Giglio Porto. No traces of the Temple of Diana once existing now can be seen. The church of San Pietro Apostolo in Giglio Castello has an ivory crucifix believed to be by Giambologna

It is also site of an Etruscan shipwreck, dating to the early Iron Age, c. 600 BC. The cargo of the ship included copper and lead ingots, iron spits, amphorae and a Corinthian helmet. Even a wooden writing tablet with stylus was preserved. The finds are almost completely lost now.

All content from Kiddle encyclopedia articles (including the article images and facts) can be freely used under Attribution-ShareAlike license, unless stated otherwise. Cite this article:
Giglio Facts for Kids. Kiddle Encyclopedia.