Government of Colorado facts for kids

The Government of Colorado is the governmental structure as established by the Constitution of the State of Colorado. It is composed of three branches: the executive branch headed by the Governor, the legislative branch consisting of the General Assembly, and the judicial branch consisting of the Supreme Court and lower courts. The constitution also allows direct participation of the electorate by initiative, referendum, recall and ratification.

The statewide elected officers are:

The Lieutenant Governor is elected on a ticket with the Governor. All statewide elected officers serve four-year terms. There are also elected members of the Colorado State Board of Education, and the Regents of the University of Colorado are elected from districts coterminous with Colorado's congressional districts or at large. As a result, the Governor does not have direct management authority over either the Department of Education or any of the state's institutions of higher education.

The executive branch is otherwise composed of the principal departments: 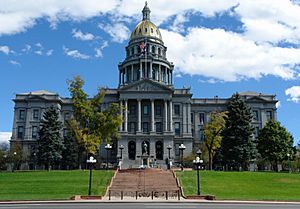 The Colorado State Capitol in Denver

The legislative body of Colorado is the Colorado General Assembly made up of two houses, the House of Representatives and the Colorado Senate. Members of the House are elected for two year terms from single-member, equal population districts. Approximately half of the members of the state senate are elected each two years to four year terms from single-member, equal population districts. The House of Representatives has 65 members and the Senate has 35 for a total of 100 legislators in Colorado. The session laws are published in the Session Laws of Colorado. The laws of a general and permanent nature are codified in the Colorado Revised Statutes (C.R.S.).

In addition to providing for voting, the people of Colorado have reserved initiative of laws and referendum of laws enacted by the legislature to themselves, and have provided for recall of office holders.

The judiciary of Colorado is defined by Article VI of the Colorado Constitution as well as the law of Colorado. The administration of the state judicial system is the responsibility of the Chief Justice of the Colorado Supreme Court as its executive head, and is assisted by several other commissions. Colorado courts include the: 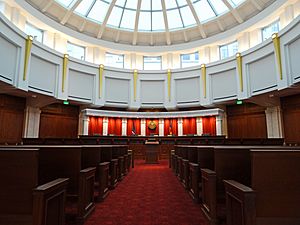 All of the courts above, other than municipal courts and Denver's county court, are part of the state court system. In Denver, county and municipal courts are integrated and are not part of the state court system for administrative purposes, and the Denver Probate Court and the Denver Juvenile Court have jurisdiction over probate and juvenile matters, respectively. Outside Denver, these matters are within the jurisdiction of the district courts.

Most crimes in Colorado are prosecuted by a district attorney. One district attorney is elected for each of the state's 22 judicial districts in a partisan election. The state attorney general also has power to prosecute certain crimes, and in rare circumstances a special prosecutor may be appointed to prosecute a crime on a case by case basis. Municipal ordinance violations are prosecuted by city attorneys.

Main pages: Colorado counties and List of cities and towns in Colorado 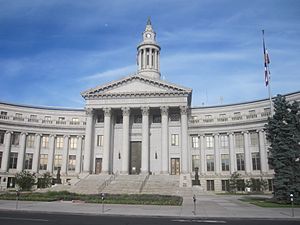 The Denver City and County Building

Colorado law makes a few distinctions between a city and a town. Colorado municipalities operate under one of five types of municipal governing authority:

All content from Kiddle encyclopedia articles (including the article images and facts) can be freely used under Attribution-ShareAlike license, unless stated otherwise. Cite this article:
Government of Colorado Facts for Kids. Kiddle Encyclopedia.