Graça Machel DBE HonFBA (Portuguese pronunciation: [ˈɡɾasɐ mɐˈʃɛɫ]; née Simbine; pronounced: [sĩˈbĩni], born 17 October 1945) is a Mozambican politician and humanitarian. She is the widow of former President of Mozambique Samora Machel (1975–1986) and former President of South Africa Nelson Mandela (1998–2013). Machel is an international advocate for women's and children's rights and was made an honorary British Dame by Queen Elizabeth II in 1997 for her humanitarian work. She is the only woman in modern history to have served as First Lady of two countries, South Africa and Mozambique.

Graça Machel is a member of the Africa Progress Panel (APP), a group of ten distinguished individuals who advocate at the highest levels for equitable and sustainable development in Africa. As a panel member she facilitates coalition building to leverage and broker knowledge, and convenes decision-makers to influence policy for lasting change in Africa.

She was chancellor of the University of Cape Town between 1999 and 2019. 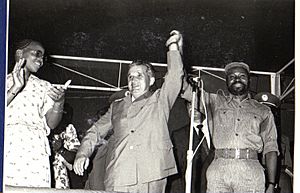 Graça Simbine was born 17 days after her father's death, the youngest of six children, in rural Incadine, Gaza Province, Portuguese East Africa (modern-day Mozambique). She attended Methodist mission schools before gaining a scholarship to the University of Lisbon in Portugal, where she studied German and first became involved in independence issues.

Graça Machel received the 1992 Africa Prize, awarded annually to an individual who has contributed to the goal of eliminating hunger in Africa by the year 2000. Machel received the 1995 Nansen Medal from the United Nations in recognition of her longstanding humanitarian work, particularly on behalf of refugee children.

In 1997, Machel was honored with the Dame Commander of the Order of the British Empire by Queen Elizabeth II for her contributions and services in the field of human rights protection. In the same year, she received the Global Citizen Award of the New England Circle. 1998, Machel was one of the two winners of the North–South Prize awarded by the North-South Centre of the Council of Europe.

In July 2017, Machel was elected an Honorary Fellow of the British Academy (HonFBA), the United Kingdom's national academy for the humanities and social sciences. In 2018, she was awarded by the World Health Organization for her contributions to the health and wellbeing of women, children and adolescents.

On 17 July 2018, Machel attended the 16th Nelson Mandela Annual Lecture, which was located at the Wanderers Stadium, Johannesburg, alongside South African President Cyril Ramaphosa and former US President Barack Obama. The event was visited by nearly 15,000 people, commemorating the 100th anniversary of Nelson Mandela's birth.

In the lead‑up to COP 27, Machel advocates that Africa's youth should have a greater say in climate politics and warned that existing development aid programs covering, for example, education may well be cut and diverted to fund climate change adaptation instead.

Following her retirement from the Mozambique ministry, Machel was appointed as the expert in charge of producing the groundbreaking United Nations report on the impact of armed conflict on children. From 2008 until 2009, she was a member of the High Level Taskforce on Innovative International Financing for Health Systems, co-chaired by Gordon Brown and Robert Zoellick. She served as the Chair of The Partnership for Maternal, Newborn & Child Health (PMNCH) from 2013-2018. In January 2016, she was also appointed by United Nations Secretary-General Ban Ki-moon to the High-level Advisory Group for Every Woman Every Child. 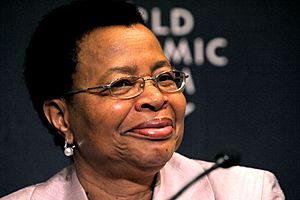 On 17 January 2016, she was announced by the UNESCO as a Sustainable Development Goals Advocate alongside 16 others, all appointed by Secretary-General of the United Nations

On 18 July 2007 in Johannesburg, South Africa, Nelson Mandela, Graça Machel, and Desmond Tutu convened The Elders. Mandela announced its formation in a speech on his 89th birthday. The group works on thematic as well as geographically specific subjects. The Elders' priority issue areas include the Israeli–Palestinian conflict, the Korean Peninsula, Sudan and South Sudan, sustainable development, and equality for girls and women.

Machel has been particularly involved in The Elders' work on child marriage, including the founding of Girls Not Brides: The Global Partnership to End Child Marriage. 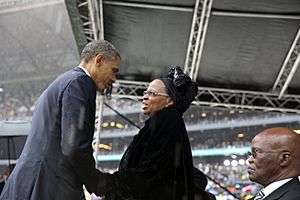 Simbine married Samora Machel, the first president of Mozambique, in 1975. Together they had two children: daughter Josina (born April 1976) and son Malengane (born December 1978). Samora Machel died in office in 1986 when his presidential aircraft crashed near the Mozambique-South Africa border. Josina is a women's rights activist and in 2020 was listed as one of the BBC's 100 Women.

Graça Machel Mandela married her second husband, Nelson Mandela, in Johannesburg on 18 July 1998, Mandela's 80th birthday. At the time, Mandela was serving as the first post-apartheid president of South Africa. Mandela died of pneumonia on 5 December 2013.

All content from Kiddle encyclopedia articles (including the article images and facts) can be freely used under Attribution-ShareAlike license, unless stated otherwise. Cite this article:
Graça Machel Facts for Kids. Kiddle Encyclopedia.