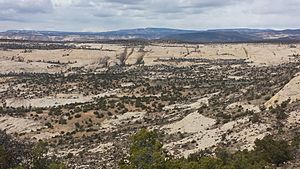 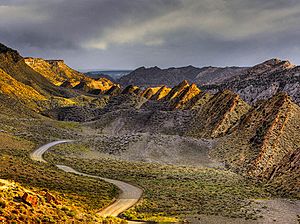 The Cockscomb at right runs along Cottonwood Canyon Road

In the 1870s, geologist Clarence Dutton first conceptualized this region as a huge stairway ascending out of the bottom of the Grand Canyon northward with the cliff edge of each layer forming giant steps. Dutton divided this layer cake of Earth history into five steps from the youngest (uppermost) rocks:

Since then, modern geologists have further divided Dutton's steps into individual rock formations.

Formations in the Grand Staircase starting with the youngest (uppermost) rocks:

The major sedimentary rock units exposed in the Grand Canyon range in age from 200 million to 600 million years and were deposited in warm shallow seas and near-shore environments. The nearly 40 identified rock layers of Grand Canyon form one of the most studied geologic columns in the world.

These layers have undergone 5000 to 10,000 feet (1500 to 3000 m) of uplift starting about 66 million years ago with the Laramide orogeny which has increased the ability of the Colorado River to cut its channel to make individual plateaus out of the Colorado Plateaus region. The major canyons of the region did not start to form until about five to six million years ago when the Gulf of California opened up and thus lowered the river's base level (its lowest point).

In the 1880s, many large dinosaur skeletons were excavated from southern Utah in regions north of the Grand Staircase. Following these discoveries there was little interest in further exploration. In the late 20th and early 21st centuries there has been greatly renewed interests in the strata of the Grand Staircase, particularly since the exposure and collection of new fossils in previously unexplored strata has a high probability of revealing fossil remnants of hitherto unseen species – a matter of substantial importance to young paleontological researchers wishing to advance in their profession.

Southern Utah has continued to reward researchers owing to its climatological "sweet spot" for exposing fossil remnants for observation and collection at the surface. At locations south, in Arizona, the climate is so dry that erosion is relatively slow. Further north, the wetter climates encourage growth of forests, which destroy fossils by the actions of roots and soil bacteria. In southern Utah, there are enough strong and wet storms to cause episodic rapid erosion and the consequent exposure of fossil remains, but with insufficient annual average rainfall to support destructive, deep-rooted plant life.

(South to north, climbing the staircase)

All content from Kiddle encyclopedia articles (including the article images and facts) can be freely used under Attribution-ShareAlike license, unless stated otherwise. Cite this article:
Grand Staircase Facts for Kids. Kiddle Encyclopedia.