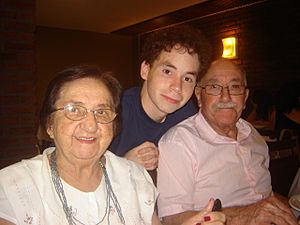 A grandson with his grandparents

There are a number of nicknames for a person's grandparents. These include 'grandpa', 'grandpapa', 'papa' and 'pawpa' for a grandfather. Nicknames for grandmothers include 'grandma', 'grammy', 'granny', and 'nanna'. There are also many unique nicknames. An example is American actress Goldie Hawn who did not want to be called 'grandma', instead came up with the nickname 'Glamma.'

Traditionally, grandparents were highly respected in most cultures. Today many grandparent-grandchild relationships are declining. Much of the modern world does not value older people the way societies did in the past. Also, popular entertainment, especially programs and movies aimed at 'tweens' (children 10 to 12 years old) portray adults as being foolish. This makes the involvement of grandparents more important than ever. 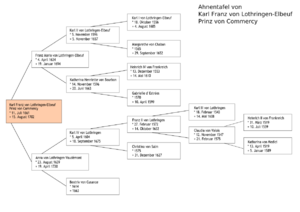 The word 'family' is often used to mean the same as the term Nuclear family. Strictly speaking, a nuclear family is made up of a husband, a wife, and their children. It may also be used to include a stepparent, stepchildren or adopted children. However, the latter family unit is more commonly called a blended family. Close kin however extends the family unit. For example, second cousins are all descendants of one or both great-grandparents. Family units extending to second cousins are considered close kin. So the term includes great-grandparents as well. Third cousins (all those descended from second great-grandparents) are not considered close kin, but just family.

(2 to the 8th power). However, the number of individuals in such a tree grows exponentially and will eventually become impossibly high. For example, a single individual alive today would, over 30 generations going back to the High Middle Ages, have about

generations or just over a billion ancestors. That would be far more than the total world population at the time.

This paradox or impossible situation, is explained by having shared ancestors, which is called pedigree collapse. Instead of every person today having a family tree of all unique ancestors, many of these ancestors occupy more than one position in the pedigree. In other words, one's 15th great-grandfather may have been their 15th great-grandfather more than once if the person today is descended from children of both or all of his marriages. So in a typical family tree, the same ancestor may pop up in more than one place in the pedigree. Pedigree collapse is generally caused by close relatives marrying in the past, which was common in many societies. Even today, because most people do not know their ancestry beyond their grandparents, they are inadvertently marrying their own distant cousins. On average, a typical European marriage today is between sixth cousins (those descended from a common sixth great-grandparent). In closed societies the relationship is usually much closer.

All content from Kiddle encyclopedia articles (including the article images and facts) can be freely used under Attribution-ShareAlike license, unless stated otherwise. Cite this article:
Grandparent Facts for Kids. Kiddle Encyclopedia.