The greater spotted eagle (Aquila clanga), occasionally just called the spotted eagle, is a large bird of prey. Like all typical eagles, it belongs to the family Accipitridae. In summer it lives in eastern Eurasia, and winters further south.

A medium-sized eagle, the greater spotted eagle only has white spots as a juvenile, when they extend in bands across the upperwing. By adulthood, the spots have faded leaving dark brown feathers across the head, body and wings, with slightly paler flight feathers on the upper side. In gliding flight, the greater spotted eagle holds the feathers at the tips of the wings downward.

This is a species of wooded country. The population is entirely migratory. It breeds from northern Europe eastwards across Eurasia, and winters in south-eastern Europe, north-eastern Africa, the Middle East and the Indian Subcontinent. Migration to the breeding grounds takes place fairly late; in Bhutan, for example, birds can be seen with some regularity until the end of March.

This species is prone to vagrancy. Its regular breeding range no longer extends as far westwards as Germany but birds are still occasionally seen there with a few records per decade. Even young birds disperse widely; the Staatliches Museum für Tierkunde Dresden has a specimen (C 21845) shot in November 1914 near Bernsdorf in Saxony. It is a juvenile, and though its exact age cannot be determined it is heavily spotted and probably less than 20 months old.

An adult greater spotted was tagged with a satellite transponder in 1993 in order to track migration. The tagged eagle migrated a total of 5,526 km (3,434 mi) from its wintering grounds in Yemen to it breeding grounds in western Siberia. It moved 150 km (93 mi) on average each day, but this increased to 280 km (170 mi) per day as the bird flew through Mesopotamia.

In its winter range, the species is more social than when breeding. Small flocks of up to ten birds or so, of varying age, can be seen to patrol the land together. They also associate with other Accipitridae such as local and/or migrant black kites (Milvus migrans lineatus and govinda) or steppe eagles (A. nipalensis), distinctly smaller and larger raptors, respectively. 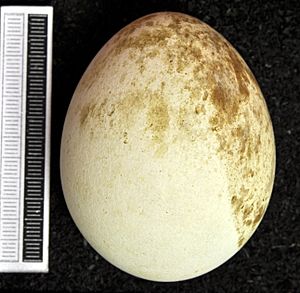 This eagle lays 1–3 eggs in a tree nest. Generally territorial, juveniles spend some time with their parents after fledging, until they reach sexual maturity and seek out a territory and a mate of their own.

All content from Kiddle encyclopedia articles (including the article images and facts) can be freely used under Attribution-ShareAlike license, unless stated otherwise. Cite this article:
Greater spotted eagle Facts for Kids. Kiddle Encyclopedia.