The Hamburg Historic District is a residential neighborhood located on a bluff northwest of downtown Davenport, Iowa, United States. It is listed on the Davenport Register of Historic Properties and on the National Register of Historic Places. The historic district is where the city's middle and upper-income German community lived in the 19th and early 20th centuries. Germans were the largest ethnic group to settle in Davenport. 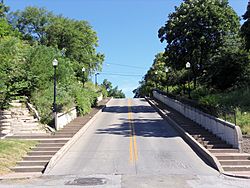 Hamburg is located to the northwest of Davenport's central business district. The neighborhood itself goes as far north as Locust Street and to the west as far as Division Street. The historic district's boundaries were reduced to the section between Fifth and Ninth (south to north) and Ripley and Vine (east to west). It includes the highest concentration of historic buildings and some of the best examples of architectural styles in the neighborhood. The Mississippi River is located five blocks to the south. There is a gradual slope to the land as one travels to the north. After the alley north of Fifth Street, it dramatically rises into a bluff. It peaks at about Seventh Street and descends less dramatically to Ninth Street. The southern part of this area provides a prominent view of the cityscape and the river. For this reason, it became a prime location for the middle and upper-income Germans who immigrated to Davenport to build their homes. The Chicago, Rock Island and Pacific Railroad tracks built along Fifth Street are yet another boundary for the area. The north side of Sixth Street (along the bluff line) that extends from Ripley Street to Gaines Street is known as the "Gold Coast." 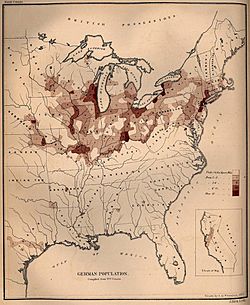 US German population in 1872. Davenport is in the center of the dark band along the Mississippi River in Eastern Iowa

German immigrants started moving into the city in noticeable numbers starting in the late 1840s. In 1848, 250 Germans came to Davenport and by 1850, that number rose to close to 3,000, or 20% of the city's population. German immigration remained strong through the 1880s. The Iowa census of 1890 showed that a quarter of Scott County's residents were natives of Germany. A disproportionate number of those immigrants came from Schleswig-Holstein, which was in a border and personal rights dispute with Denmark in the 1840s. German “free thinkers” from the two states were leaving in large numbers and many came to Davenport. Their political and philosophical thinking tended to be anti-clerical and secular. It would eventually dominate Davenport politics and set the city apart from communities of similar size in the Midwest. Other German immigrants to Davenport came from Bavaria, Hamburg, Hanover, and Mecklenburg. Davenport's small Hungarian community, refugees from the revolution against Austria in the 1840s, generally lived in the German neighborhoods, as well. 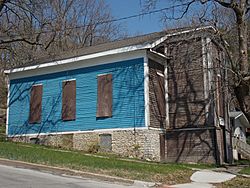 Initially, the native-born citizens of Davenport resented the large numbers of Germans coming to the city and the influence they were asserting. They were also opposed to separate German societies, schools, cultural organizations, and events. Supporting the Temperance movement was one way opponents expressed anti-German sentiments. In 1855, the Know Nothing movement emerged with the goal of keeping local politics to native-born people. By the end of the Civil War, with the sons of both Germans and non-Germans dying for a common cause, there was a sense of acceptance even though the numbers of Germans coming into the city continued to increase.

Because of the size of Davenport's German population, their customs dominated the city's economic, cultural, and political life. Many of those who were leaders in civic life lived in the Hamburg District. The lower income Germans tended to live below the hill and above the factories along the Mississippi River. Their neighborhoods are collectively known as the West End, although they were not all German, and included the West Third Street Historic District. Harrison Street is generally the dividing line between the Germans on the west and the non-Germans on the east side. German influence in Davenport started to wane in the early decades of the 20th century, especially with the onset of World War I. The war, coupled with the younger generation's lack of a distinct German identity, led to the decline of German influence. 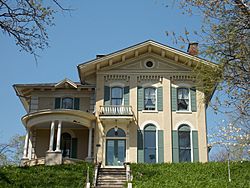 Prominent Davenport citizens who lived in the Hamburg District included Henry Lischer, who published the influential German-language newspaper Der Demokrat; merchants August Steffen and his son August as well as F. Max D. Peterson, who was a partner in the J.H.C. Petersen's Sons' Store; brewers Henry Frahm and Henry Koehler; the Mueller's who owned a large lumber mill; H.H. Andressen who founded the German Savings Bank, which was later renamed American Commercial and Savings Bank; politician and German-American leader Hans Reimer Clausen; grocer Charles Beiderbecke; and financier William H. Weise. All of the above-named men had roots in Schleswig-Holstein, they built significant houses in the Hamburg District, and many of their children married a son or daughter from one of the other's families. 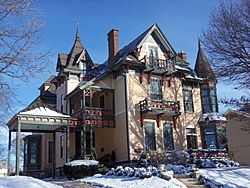 The geographical location of the Hamburg District is a fairly steep bluff north of the downtown area. The sidewalk on Ripley Street is replaced by steps as it climbs the hill. The area has the largest concentration of historically significant houses in Davenport. As with other areas of the city, the simple Greek Revival style was the first to appear in Hamburg. These homes are generally at the base of the hill. The style is realized in cottages and the more popular two-story, 3-bay front gable homes. Other homes in the district include large Victorian homes in the Gothic Revival, Second Empire, Italianate, and the Queen Anne styles built in the 19th century. Many of these homes crown the bluff and offer vistas overlooking the river valley below. There are also examples of early 20th century Georgian Revival and American Craftsman homes. The historic district is rounded out by smaller and more simple late 19th and early 20th century homes and a few modern dwellings.

The Hamburg Historic District is largely a residential area today. Institutional architecture that existed has largely been torn down or converted to residential use. One such building on West Seventh Street was built for Iowa College, which moved from the area in the 1850s to the present College Square Historic District. The former German Methodist Episcopal Church remains on West Sixth Street, while Zion and Trinity Lutheran Churches built new buildings outside of the district in the mid-20th century. Many civic, cultural, religious, and commercial buildings that served the German citizens of the city were not built in the Hamburg District. 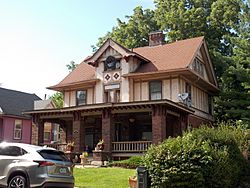 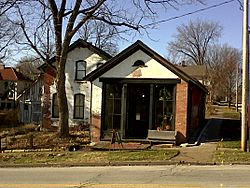 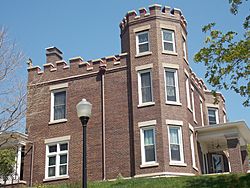 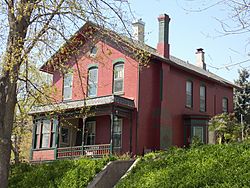 A vernacular house type named for Thomas McClelland, a prolific builder/contractor in Davenport, who built a significant number of them. 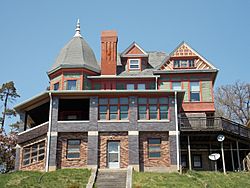 All content from Kiddle encyclopedia articles (including the article images and facts) can be freely used under Attribution-ShareAlike license, unless stated otherwise. Cite this article:
Hamburg Historic District (Davenport, Iowa) Facts for Kids. Kiddle Encyclopedia.