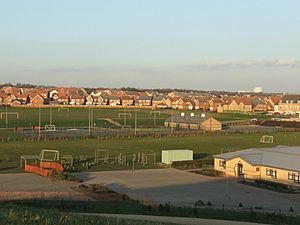 Hampton Hargate and part of primary school building in foreground.

Hampton is a developing township to the south of Peterborough, Cambridgeshire in the United Kingdom.

The first two neighbourhoods to be complete are Hampton Hargate, which is home to a community of around 1,700 homes, and Hampton Vale, with approximately 1,900 homes. Each neighbourhood is based around its own local centre with community facilities, shops and primary school. Work is continuing on building a third neighbourhood at Hempsted, while planning is now underway on a fourth neighbourhood, the Hamptons, which, like other parts of Hampton, will have its own distinct character.

Eventually Hampton will have up to 8,500 new homes spread over its four local areas, with additional schools, local centres and leisure facilities, as well as commercial and retail areas providing more than 12,000 jobs. Construction started in 1996 and is scheduled to continue until at least 2023.

Since the first arrivals to Holly Walk, Hampton Hargate, in 1997, more than 4,750 new homes have been built at a rate of up to 500 a year. More than 30 home builders and housing associations have built schemes, including around 900 units of affordable housing.

Innovative homes schemes include a zero carbon house built in association with Morris Homes Two self-build schemes have been included, allowing people to design and build their own homes.

Hampton College, a secondary school built to serve Hampton, opened to years 7 and 8 in September 2005. By 2008 the school accepted students in years 7 through to 11. Further expansion, including a sixth form, was initially due for completion by 2010. Although the school will begin AS Level courses in September 2009, the date for the new buildings is currently under review. The school currently boasts an outdoor amphitheatre and is built around a courtyard setting. In the evenings, the school is used for a variety of groups and adult education classes and it is hoped that the school will eventually form the heart of the community within Hampton. The college was recently found to be 'outstanding' by Ofsted, and was rated as outstanding in 6 out of a possible 7 categories. This puts it in the top 2% of schools nationally.

Hampton is served by a large shopping centre - Serpentine Green - which opened in 1999 and includes a Tesco Extra hypermarket, Boots, W H Smith, Costa Coffee, Mothercare, and many other High St names. It is located off the A15 road and has free parking. 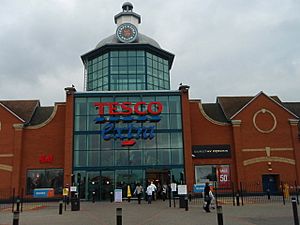 There are currently two community centres on Hampton. The first is alongside Hargate Primary School, the second opened at Hampton Vale local centre in 2011. Other community facilities include Hampton Community and Sports Association, used by Hampton Football Club which has grown to have 23 separate squads for girls and boys. Details of local groups and clubs are listed on the Hampton interactive map.

A £50,000 sculpture competition resulted in David Nash (artist) OBE RA being commissioned to create a five piece work, The Noon Vessel, for the courtyard of Hampton College, creating shadows as the sun moves around.

The township is being developed on the site of former brick fields. The Ancient Romans were the first to work the Oxford clay in this area and by the twentieth century was one of the UK's most important producers of bricks. Bricks from this area were known as "flettons" after the town, the term later became a little more generic.

Companies with distribution centres at Kingston Park, Hampton, include IKEA, Debenhams and Prologis. Other well-known names include News International, Kiddicare, GKL Northern and Volvo. Deafblind UK and Mencap have headquarters operations in Hampton.

The 2011 UK census showed Orton with Hampton ward has the highest proportion of employed people in Peterborough. 76.6% of 16- to 74-year-olds are working.

All content from Kiddle encyclopedia articles (including the article images and facts) can be freely used under Attribution-ShareAlike license, unless stated otherwise. Cite this article:
Hampton, Peterborough Facts for Kids. Kiddle Encyclopedia.