Harewood ( HAIR-wuud) is a village and civil parish in the City of Leeds metropolitan borough, West Yorkshire, England. The civil parish population at the 2011 census was 3,734. The A61 from Leeds city centre to Harrogate passes through the village. The A659 from Collingham joins the A61 outside the main entrance to Harewood House ( HAR-wuud) to descend the slopes of the Wharfe valley before continuing towards Pool-in-Wharfedale.

Harewood House, a country house was designed by architects John Carr and Robert Adam, and built between 1759 and 1771 for Edwin Lascelles, 1st Baron Harewood. Its garden was designed by Lancelot "Capability" Brown and spans 1,000 acres (400 ha).

All Saints' Church, the former parish church, stands to the west of the village, in the grounds of Harewood House which was built in the 18th century. The village was relocated in the late-18th century, leaving the church isolated from the village population. It is a grade I listed building but is no longer used regularly for worship and is in the care of the Churches Conservation Trust.

Harewood C of E Primary School is a state-funded faith school which stands opposite the grounds of the Harewood estate on the A61 and was built by the estate in 1864 for estate workers' children. In 2005 and 2008 the school was awarded "outstanding" grading following Ofsted inspections. The school maintains its historic links with the estate, the children regularly use its grounds and educational facilities. Gateways School is an independent private school with a sixth form. The junior school and nursery are co-educational, admitting boys and girls to age 11. 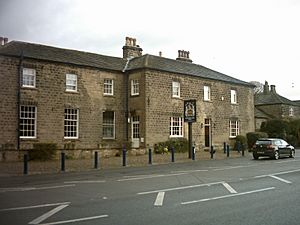 The Harewood Arms public house and hotel is located opposite the entrance to the Harewood Estate.

It is the location of the UK's longest motorsport hillclimb, Harewood speed Hillclimb (pronounced HAIR-wuud). The exterior set for the soap opera Emmerdale is located in the Harewood estate.

All content from Kiddle encyclopedia articles (including the article images and facts) can be freely used under Attribution-ShareAlike license, unless stated otherwise. Cite this article:
Harewood Facts for Kids. Kiddle Encyclopedia.