Kids Encyclopedia Facts
This page is about the city. For the adjacent town, see Hartford (town), Wisconsin.

Hartford is a city in Washington and Dodge counties in the U.S. state of Wisconsin. As of the 2010 census, the city had a population of 14,223. All of this population resided in the Washington County portion of the city.

John Thiel and Nicolas Simon first surveyed the area that would become Hartford in 1843. James and Charles Rossman accompanied Nicolas Simon back to Hartford in 1844, and soon bought 40 acres around the rapids of the Rubicon River. After constructing a dam across rapids in the river, the Rossmans built a sawmill that harnessed the power of the water to make lumber for the growth of the area. Rails were laid in 1855 that linked Chicago, Milwaukee, La Crosse and Minneapolis until the early 1900s.

The town was named after Hartford, Connecticut. Hartford was a New England settlement. The original founders of Hartford consisted entirely of settlers from New England, most of whom were from Connecticut and Vermont, though some came from rural Massachusetts, New Hampshire and the region of downeast Maine. They were descended from the English Puritans who settled New England in the 1600s and were part of a wave of New England farmers who headed west into what was then the wilds of the Northwest Territory during the early 1800s. Most of them arrived as a result of the completion of the Erie Canal and the end of the Black Hawk War. When they arrived in what is now Hartford there was nothing but dense virgin forest and wild prairie. They laid out farms, constructed roads, erected government buildings and established post routes.

The settlers of Hartford brought with them many of their Yankee New England values such as a passion for education by establishing many schools, as well as staunchly supporting abolitionism. They were mostly members of the Congregationalist Church though some were Episcopalian. Due to the second Great Awakening some of them had converted to Methodism and some had become Baptists before moving to Hartford. Hartford, like much of Wisconsin, was aligned with early New England culture for most of its early history. The first church in Hartford was the First Congregational Church, constructed by Yankee New England migrants. The Church was built in 1847. German and Irish immigrants began arriving after 1842, though initially in small numbers. In the late 1870s the number of German immigrants increased. 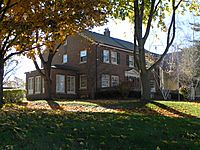 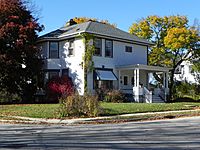 Several buildings are listed on the National Register of Historic Places and among them are some of the Kissel houses as well as houses they built for others.

The Hartford post office contains an oil on canvas mural, Autumn Wisconsin Landscape, painted in 1940 by Ethel Spears. It was produced for the Section of Painting and Sculpture (later the Section of Fine Arts) of the Treasury Department as part of the WPA Depression-era employment projects.

Hartford is located within the Kettle Moraine, a large moraine formed when the Green Bay and Lake Michigan Lobes collided. These glacial movements created varied land formations such as kettles, lakes, hills, and kames that distinguish the region.

The city was the site of an F1 tornado on June 18, 2006, which caused minor damage to homes in the area, and major damage on the city's south side. Lincoln Elementary School and the Silver Bell Motel both suffered roof and structural damage.

There were 5,685 households of which 35.1% had children under the age of 18 living with them, 51.4% were married couples living together, 9.1% had a female householder with no husband present, 5.0% had a male householder with no wife present, and 34.5% were non-families. 28.3% of all households were made up of individuals and 11.5% had someone living alone who was 65 years of age or older. The average household size was 2.47 and the average family size was 3.06.

There were 1,397 households out of which 40.6% had children under the age of 18 living with them, 74.7% were married couples living together, 4.0% had a female householder with no husband present, and 17.5% were non-families. 14.5% of all households were made up of individuals and 4.2% had someone living alone who was 65 years of age or older. The average household size was 2.88 and the average family size was 3.19. 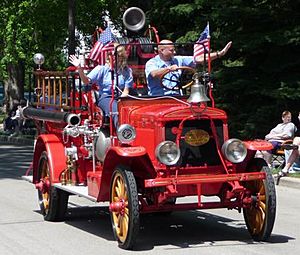 All content from Kiddle encyclopedia articles (including the article images and facts) can be freely used under Attribution-ShareAlike license, unless stated otherwise. Cite this article:
Hartford, Wisconsin Facts for Kids. Kiddle Encyclopedia.