The Town of Hayden is a home rule municipality located in Routt County, Colorado, United States. The town population was 1,941 at the 2020 United States Census. Hayden is a part of the Steamboat Springs, CO Micropolitan Statistical Area. The town sits along U.S. Highway 40 in the Yampa River Valley between Craig and Steamboat Springs. Hayden is located near the Yampa Valley Regional Airport, by which Hayden is one of the smallest communities in the U.S. to have mainline passenger jet service provided by American Airlines, Delta Air Lines, and United Airlines on a scheduled basis.

The Ute people used the area for summer hunting before the town was settled. Trappers worked in the area in the early 1800s.

The area was first settled in 1875, with the town established in 1894 and incorporated in 1906. Hayden was named for F.V. Hayden, head of a survey party for the U.S. Geological & Geographic Survey in the late 1860s. Hayden explored western Colorado during the late nineteenth century.

Historically a center of coal mining and agriculture, it consists today of a small cluster of homes and businesses. 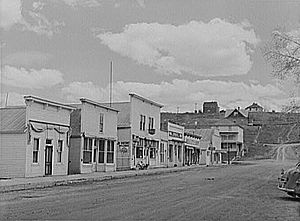 According to the United States Census Bureau, the town has a total area of 2.5 square miles (6.5 km2), all of it land.

There were 618 households, out of which 42.1% had children under the age of 18 living with them, 57.1% were married couples living together, 9.4% had a female householder with no husband present, and 28.2% were non-families. 21.7% of all households were made up of individuals, and 5.5% had someone living alone who was 65 years of age or older. The average household size was 2.63 and the average family size was 3.08.

All content from Kiddle encyclopedia articles (including the article images and facts) can be freely used under Attribution-ShareAlike license, unless stated otherwise. Cite this article:
Hayden, Colorado Facts for Kids. Kiddle Encyclopedia.