Hazelwood Park is a middle-upper class suburb in the City of Burnside, Adelaide, South Australia with a census area population of 1,717 people. The suburb is about 5 kilometres east of the Central business district. Hazelwood Park, a suburban park inside the suburb, is the major attraction in the suburb. This includes the Burnside Swimming Centre, a popular site in the summer. Much of the remainder of the suburb is residential but there is a small shopping area along Glynburn Road on the eastern edge. The area was first settled by Europeans in 1848 but has seen many community changes over the years.

The suburb is split in half by Greenhill Road, to the north there are residential dwellings and the park. To the south and east are the foothills of the Mount Lofty Ranges with continued residential properties. Hazelwood Park is bounded to the north by Knightsbridge Road, to the east by Glynburn Road, to the south by Cooper Place and to the west by Devereux Road and a line along the back of the blocks between Hazelwood and Tusmore avenues. 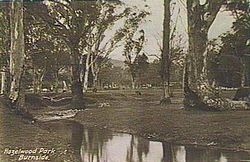 Prior to European settlement, the area that is now Hazelwood Park was part of the traditional lands of the Kaurna people, that stretched from Port Broughton to Cape Jervis. The surrounding area (including the suburbs of Leabrook and Erindale, along with portions of the current suburbs of Burnside) and Hazelwood Park, was originally known by the name Knightsbridge when a village was laid out under that name in 1848. The village was laid out in section 298 in the land between First and Second Creeks. Unlike other more brilliantly designed early villages (such as Beaumont) Knightsbridge was laid out by a Captain Hall, originally from Port Adelaide. He simply divided the land into eight blocks and ran Knightsbridge Road through them. Much of the land was sold to timber merchants, who quickly made use of the suburb's thick bushland. The first house in the suburb, which remains to this day on 12 Hazelwood Avenue, was built by George Taylor, a local grocer, in 1854. Named Knightsbridge House, it was unique in having much of the ground floor situated half-underground to cope with the fierce Australian summers. The total property owned by Taylor amounted to thirty-three acres, which included much of today's suburb. He returned to England in 1856 and leased the property out. 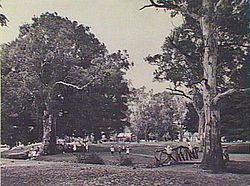 Notably, an orphanage was established on the land by the Sisters of St. Joseph, a Catholic Organisation. They cared for forty to sixty children on the property between the years 1875 and 1887. The orphanage was known for providing much care to the children, with the Adelaide daily the Register noting that 'the good Sisters of St. Joseph were perfect slaves to these children'. With better accommodation provided at Woodville, the orphanage moved and the Knightsbridge farm attempted a sale, but was once again leased out. In the years 1888 to 1950 it was a large dairy farm under the Coote family. The remaining part of section 298, much of it owned by a Mr Debney and not part of Knightbridge Farm, was further subdivided in 1880 and became the village of Leabrook.

The remainder of today's suburb of Hazelwood Park, south of Greenhill Road, was originally known as Linden. It lent its name to today's suburb of Linden Park, and it is notable that Linden Park's name remained so, even after Linden became part of Hazelwood Park. Linden had some of the best arable land in the area, and was a highly sought-after area.

After World War II, with Adelaide rapidly expanding both in the metropolitan region and in the hills area various plans were laid out to replace the windy and dangerous Mount Barker Road. One of these proposals was the Burnside-Crafers Highway, which envisioned leaving Greenhill Road once reaching Hazelwood Park. It was then to pass through Hazelwood Park and Beaumont, wind around the hills of Waterfall Gully and then go over Eagle On The Hill to Crafers. The Burnside Council put much effort into this proposal, widening Linden Avenue (which runs NW to SE) in preparation for the highway. The proposal was eventually rejected in favour of upgrading Mount Barker Road and Linden Avenue remained a huge out-of-place road running through an otherwise peaceful suburb. After years of drivers racing down the 2 km long avenue, the Burnside Council constructed a large median strip in 2005. 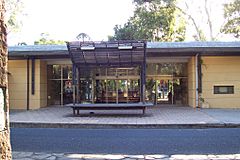 The entrance to the George Bolton (Burnside) Swimming Center after renovations

The actual Hazelwood Park was acquired by the State Government free of charge in July 1915, and gazetted as a 'pleasure resort'. This came from the old Hazelwood estate, owned by the Francis Clark family. The name "Hazelwood" reflects the name of the school in Birmingham founded by Rowland Hill (postal reformer), a brother of Caroline Clark. The Burnside Council sought to acquire the park from the State Government after finding notes from a government meeting in 1944 that were to see the park sold to a private owner. The Mayor of Burnside at the time, George Bolton, had a grand vision for what the park should become; notably in the construction of an Olympic-sized swimming pool.(Bolton was Mayor from 1952 to 1954 and then from 1962 to 1967) After years of effort, the Burnside Council eventually acquired the park in May 1963 after negotiations with the Premier, Sir Thomas Playford. As part of the acquisition, the Burnside Council was to retain the name 'Hazelwood' and was to maintain the park at a level satisfactory to the State Government. The deed was transferred on 2 January 1964 for the 2.2 ha of Section 298 that is Hazelwood Park. In 1966, after much political wrangling, a 3-pool swimming center opened at Hazelwood Park. It was named after Mayor George Bolton who had been the leading voice in advocating its construction. The George Bolton Swimming Center remains open to this day, and saw renovations in 1996 which added further facilities. . The park is a State Heritage Item. The SA State Heritage Register lists its significances as follows:

State Heritage Significance: "Hazelwood Park is a portion of the original Hazelwood Park Estate which was owned by the Clark family 1853-1914. During their ownership they allowed the general public to use the area for recreational purposes and it became known as Clark's Paddock. That use was formalized when the family offered to sell it to the South Australian Government provided that it remained a park and the Government purchased it in 1914. In 1915 it was dedicated as a National Pleasure Resort under the National Pleasure Resorts Act 1914, one of the first four places to be dedicated. The Park is significant for being an early National Pleasure Resort and for its association with the Clarks. The Clark family were notable for their involvement in public life. Howard was a leading figure in the Adelaide Philosophical Society and in the Institute movement. He also edited one of the Colony's major newspapers, the 'South Australian Register' 1870-78. Caroline Emily was largely responsible for introducing the system of boarding-out (as opposed to fostering) children from poor families." (HSA 2/01)

Hazelwood Park's original vegetation was similar to the rest of the area. Blue and Red gum woodland existed primarily to the north of Greenhill Road, while Grey box woodland existed roughly to its south. The Grey box woodland, when still in existence at the time of settlement, was called the 'Black Forest'. The park in the suburb is a good example of the remaining Blue and Red Gum.

Modern vegetation is relatively dense, but contains many introduced floral species. The Burnside Council in recent years has paid particular attention to retaining and planting native plant species when upgrading/maintaining its reserves. This is in stark comparison to past times when native vegetation was replaced by European species in keeping with the wishes of the then population. First Creek, which has its origins in the Mount Lofty Ranges and Adelaide hills flows through both the suburb and the park. It is a seasonal creek and runs dry throughout much of the summer months. The creek winds down from Waterfall Gully, through Burnside into Hazelwood Park and then continues on to join the River Torrens near the Adelaide Botanical Gardens. Apart from Hazelwood Park, the only other notable reserve is the Ray Cooper Gardens, situated near the midpoint of Linden Avenue. 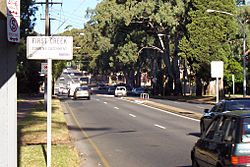 For the Hazelwood Park census area, like most Australian areas, transport is primarily car based, with on average 1.56 cars per household. This is typified in that 68.5% of all residents drive to work and only 5.8% were passengers. Traffic congestion is relatively light in Hazelwood Park and only occurs during peak periods on the two main thoroughfares, Greenhill and Glynburn Roads. The city can typically be reached in ten minutes, and fifteen in peak periods using Greenhill Road. Like most Adelaide suburbs, the major roads have a 60 km/h speed limit and the side streets a 50 km/h limit. Hazelwood Park's road network (with few exceptions) follows the usual Adelaide grid pattern.

Only 7.5% took the bus to work, using Adelaide Metro buses, the only public transport in the suburb. Normal routes into the CBD are by the 142 or 147 which both run into or close to the suburb. The 820/821 bus travels from the Adelaide Hills into the CBD along Greenhill Road. Buses typically run on 30-minute intervals during weekdays and one-hour intervals at other times. Unfortunately, due to the heavy emphasis on car transport in the area, the bus routes are limited and under-developed, particularly compared to the efficient public transit links to the rest of metropolitan Adelaide.

The biggest attraction in the suburb is the park and accompanying Burnside Swimming Centre. There is a lap pool, plus a 25-metre kids pool and a wading pool. There is also a sauna and steamroom, plus two playgrounds and a kiosk. This location is only open through summertime because it is an outdoor pool and is very popular on hot days in Adelaide (greater than 300C) when it is open late. First creek continues its journey from the hills through the park, the water flowing from Waterfall Gully and into Tusmore. The creek cuts through the middle of the park and is dammed at one point to create a pond. This is a popular place for children to feed the ducks and families to sit by. There is one playground in the north-east of the park and there are several sets of tables and a few barbecues dotted throughout the park. The park is relatively large by local standards and there are no playing fields. It is more strongly characterised by massive old Gum trees that can be seen from blocks away. Although it has good facilities, it is normally not as popular as the nearby smaller Tusmore Park. It is also the location of a very popular traditional carols night, held annually on the first Sunday in December.

Hazelwood Park contains a number of small commercial precincts, concentrated around the Glynburn/Greenhill Road roundabout. The area was known previously as The Feathers, and many stores have adopted this moniker into their names. The shops situated along Greenhill Road are part of the Feathers Shopping Center, and include the local fish and chip shop, an Indian restaurant and a Pizza Bar. At the western corner of Greenhill and Glynburn is a medium-sized commercial center, containing a Goodlife gym, a Fasta Pasta restaurant and a number of small offices. Opposite this complex to the north is the Feathers Hotel, the only one in the immediate area, situated in the neighbouring suburb of Burnside. A local supermarket is also situated near the Waterfall Terrace/Glynburn Road intersection. Larger shopping complexes in the area are located outside of the suburb – at nearby Burnside Village, Marryatville Shopping Center and the Norwood Parade.

Shops in the Feathers shopping center, along Greenhill Road

All content from Kiddle encyclopedia articles (including the article images and facts) can be freely used under Attribution-ShareAlike license, unless stated otherwise. Cite this article:
Hazelwood Park, South Australia Facts for Kids. Kiddle Encyclopedia.