Hazlehurst is a city in and the county seat of Copiah County, Mississippi, United States, located about 30 miles (48 km) south of the state capital Jackson along Interstate 55. The population was 4,009 at the 2010 census. It is part of the Jackson Metropolitan Statistical Area. Its economy is based on agriculture, particularly tomatoes and cabbage.

The first settlement here by European Americans became known as the town of Gallatin; two lawyers and brothers-in-law named Walters and Saunders came from Gallatin, Tennessee, in 1819 and named the village after their hometown. They built their homes on the banks of the Bayou Pierre, in the western part of Copiah County. Other settlers came with them, and in 1829 the state legislature incorporated the town. The first decades of agriculture were based on the use of slave labor of African Americans. The incorporation charter was repealed on January 18, 1862.

The construction of the New Orleans, Jackson and Great Northern Railroad began on November 3, 1865, stimulating development of Hazlehurst at the railway stop. It was named for Col. George H. Hazlehurst, an engineer for the new railroad. A city in Georgia is also named for him.

As Hazlehurst grew, Gallatin declined into a settlement at a crossroads. In April 1872, the legislature ordered the county board of supervisors to hold an election to decide whether the county seat should be moved from Gallatin to Hazlehurst. After a majority voted for the change, Gallatin's old brick courthouse was torn down and reassembled in Hazlehurst. Several years later, the old courthouse suffered a fire and was replaced by a new building. The courthouse has been destroyed and rebuilt more than 15 times during the town's history.

This city had civil rights activity during the mid-1960s. Because of violence against blacks in this area, Mississippi, the armed Deacons for Defense and Justice established centers here and in nearby Crystal Springs in 1966 and 1967. They provided physical protection for protesters working with the NAACP on a commercial boycott of white merchants to force integration of facilities and employment, and to gain jobs for African Americans following passage of civil rights legislation in 1964.

Hazlehurst is located slightly east of the center of Copiah County. U.S. Route 51 passes through the center of the city, leading north 9 miles (14 km) to Crystal Springs and south 20 miles (32 km) to Brookhaven. Interstate 55 runs west of and generally parallel to US 51, with access to Hazlehurst from exits 59 and 61. Mississippi Highway 28 crosses US 51 and I-55 in the northern part of town, leading east 14 miles (23 km) to Georgetown and west 46 miles (74 km) to Fayette. 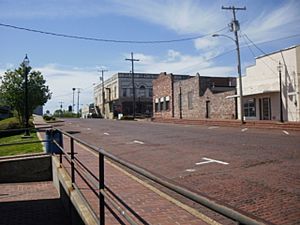 All content from Kiddle encyclopedia articles (including the article images and facts) can be freely used under Attribution-ShareAlike license, unless stated otherwise. Cite this article:
Hazlehurst, Mississippi Facts for Kids. Kiddle Encyclopedia.