Herbie Goes to Monte Carlo is a 1977 American comedy adventure film and the third installment of The Love Bug film series made by Walt Disney Productions starring Herbie—the white 1963 Volkswagen racing Beetle with a mind of its own. 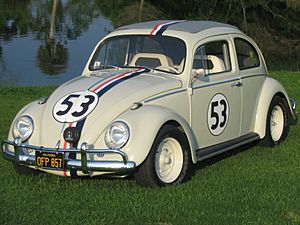 The film stars Dean Jones as returning champion race car driver Jim Douglas, joined by his somewhat cynical and eccentric riding mechanic Wheely Applegate (Don Knotts). Together with Herbie, the "Love Bug", a 1963 Volkswagen Beetle, they are participating in the fictional Trans-France Race, from Paris, France, to Monte Carlo, Monaco. According to dialogue, they hope to stage a racing comeback in the event.

For the Trans-France Race, Douglas and Herbie have three major opponents. The first is Bruno Von Stickle. (Eric Braeden), a German driver with experience in the "European Racing Circuit". He is deemed to be a formidable contender prior to and during the race. The second is Claude Gilbert (Mike Kulcsar), a French driver. His dominance in the race seemed similar to that of von Stickle, until he crashed in the later stages. The third is Diane Darcy (Julie Sommars), a very beautiful, if somewhat icy, feminist-minded, young woman and the only female driver in the Trans-France Race. She initially hates Jim for apparently his, but what was actually Herbie's, knee-jerk behavior that ruined her chances of succeeding during the first qualifying rounds. This was because of Herbie sighting and falling in love at first sight with Giselle, her Lancia Scorpion. As being a car with whom Herbie falls in love during the film (much as Jim seems to be attracted to Diane herself), Herbie's infatuation with Giselle results in his compromising his full original plan of winning the Trans-France Race, and turning against that same will of his partners, Jim and Wheely. However, the strong-willed Diane does not appear to believe in any cars that can be alive and have a mind of their own.

Diane and Giselle unfortunately crash into a lake towards the end of the race, and with victory in sight. But Herbie and Jim manage to save both car and woman from drowning. Because of this, she soon changes her attitude toward Jim after he saves her life and she witnesses Herbie towing Giselle out of the lake. All three watch as Herbie crawls next to Giselle and the two cars hold doors like holding hands. When Herbie seems to have trouble restarting because of being determined to stay with Giselle, Diane is now fully convinced that cars can have minds of their own because she now knows her own car is alive as well. She encourages the little car not to relent in the quest for victory in the Trans-France Race. With Diane now out of the race (followed shortly thereafter by Claude Gilbert in the aforementioned crash), Jim pursues Von Stickle through the streets of Monte Carlo, combatants in a thrilling duel for the win. In the end, though, Bruno von Stickle is overtaken by the little car in the famous tunnel of the Formula One race track, Herbie outracing him by outsmarting him through driving upside down on the tunnel roof. Jim drives Herbie to victory for (also according to dialogue) the 20th time in their careers.

As the film progresses, two thieves, Max (Bernard Fox) and Quincey (Roy Kinnear), steal the famous Étoile de Joie (French for "Star of Joy") diamond and cleverly hide it in Herbie's fuel tank (Herbie was fitted with an external fuel filler cap for this film - a 1963 Beetle's cap actually being inside the front luggage compartment) in order to avoid being captured by a swarm of searching policemen. But little did they know that they picked the wrong car to hide it in, because of one car that was alive and had a mind of its own. That causes them to blow every chance they get in getting back the diamond they hid in him. Because of this, and on a count of an attempt where they at one point tried to threaten Jim and Wheely at gunpoint to relinquish the car to them, an encounter from which Herbie managed to escape, and thanks to a misunderstood conclusion thereafter that Diane would have tried to mastermind the whole event. Subsequently, Herbie is placed under the protection of the French police. It is also revealed not too far in that Inspector Bouchet (Jacques Marin), also known as "Double X" as a code name to the thieves, is the mastermind behind the museum robbery, though the fact of his scheme is revealed near the end of the movie. It is the eager, and somewhat knee-jerk and unpunctual young detective Fontenoy (Xavier Saint-Macary), of whom the Inspector is the superior officer, who unravels the mystery of L'Étoile de Joie, and has Bouchet clapped in handcuffs.

In the end, Jim and Diane begin to fall in love, as do Wheely and the Monte Carlo trophy girl (Katia Tchenko); even breaking a pact they made in the beginning. Most of all, Herbie and Giselle (which Diane names her car) fall in love again as well.

On July 11, 1977, Herbie joined other immortals of the silver screen when he placed his wheel-prints in cement in the forecourt of Mann's Chinese Theatre in Hollywood, California; the ceremony was also attended by the film's stars Dean Jones, Don Knotts and Julie Sommars, as well as several hundred guests and tourists. Mayor of Los Angeles Tom Bradley sent a proclamation officially declaring July 11 as "Herbie Goes to Monte Carlo Day" and a floral wreath was presented to Herbie by Miss Monte Carlo. The ceremony was preceded by a parade on Hollywood Boulevard featuring a traditional Chinese band, firecrackers, 25 Lancia sports cars, clowns, cheerleaders and the Goodyear Blimp. Afterwards, a special invitational screening of Herbie Goes to Monte Carlo was held inside the Chinese Theatre, which was celebrating its 50th anniversary that year.

All content from Kiddle encyclopedia articles (including the article images and facts) can be freely used under Attribution-ShareAlike license, unless stated otherwise. Cite this article:
Herbie Goes to Monte Carlo Facts for Kids. Kiddle Encyclopedia.