Kids Encyclopedia Facts
This page is about the peak in Colorado. For the peak in Alaska, see Mount Hesperus (Alaska).

Hesperus Mountain (Navajo: Dibé Ntsaa) is the highest summit of the La Plata Mountains range of the Rocky Mountains of North America. The prominent 13,237-foot (4,035 m) thirteener is located in San Juan National Forest, 13.2 miles (21.2 km) northeast by east (bearing 59°) of the Town of Mancos in Montezuma County, Colorado, United States. The summit of Hesperus Mountain is the highest point in Montezuma County.

Though not of particularly high elevation for the region, Hesperus Mountain is visually quite prominent, as it is near the southern edge of the San Juan Mountains and rises over 7,000 ft (2,100 m) above the area.

Hesperus is notable as the Navajo People's Sacred Mountain of the North, Dibé Ntsaa, which marks the northern boundary of the Dinetah, their traditional homeland. It is associated with the color black, and is said to be impregnated with jet. When First Man created the mountain as a replica of mountains in the Fourth World, he fastened it to the ground with a rainbow and covered it in darkness.

The San Juan Mountains have been the traditional homeland of the Ute People. http://www.dargnet.org http://uintahbasintah.org/maps/ubsw.jpg 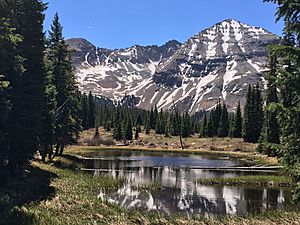 All content from Kiddle encyclopedia articles (including the article images and facts) can be freely used under Attribution-ShareAlike license, unless stated otherwise. Cite this article:
Hesperus Mountain (Colorado) Facts for Kids. Kiddle Encyclopedia.