Highland Beach is a town in Anne Arundel County, Maryland, United States. The population was 96 at the 2010 census. The town was founded late in the 19th century by affluent African Americans from Washington, D.C. and Baltimore, looking for a summer retreat on the Chesapeake Bay. The town's incorporated status gave it a unique standing in empowering it to maintain its own police force. Celebrities with homes there have included historian and author Alex Haley, actor and comedian Bill Cosby, and tennis champion Arthur Ashe. Street names in the town include Crummell, Dunbar, Henson, Augusta, Douglass, Langston, and Washington, which were chosen to honor notable African Americans of the time.

Highland Beach was founded in the summer of 1893 by Charles Douglass (Frederick Douglass' son) and his wife Laura after they had been turned away from a restaurant at the nearby Bay Ridge resort because of their race [citation needed]. They bought a 40-acre (160,000 m2) tract on the Chesapeake Bay with 500 feet (150 m) of beachfront and turned it into a summer enclave for their family and friends. Their home, the Douglass Summer House, was listed on the National Register of Historic Places in 1992. It became a gathering place for upper-class blacks, including many of the well known personages of the age.

Among the residents and guests were Paul Robeson, D.C. municipal court judge Robert Terrell and his wife Dr. Mary Church Terrell, Robert Weaver, Harriet Tubman, W. E. B. Du Bois, and poets Langston Hughes and Paul Laurence Dunbar. Charles Douglass’ father, the famous abolitionist Frederick Douglass, visited and would have become a resident had he not died before the house that his son was building for him was completed.

When Highland Beach was incorporated in 1922 it became the first African-American municipality in Maryland. Although founded as a summer resort, it is now a town of year-round residents who choose not to permit commercial establishments. There are some sixty homes, many of them still owned and occupied by descendents of the original settlers. The residents are proud and protective of their town’s heritage, established over a century ago by people determined to overcome the prejudices of their post-Reconstruction times. However, as of the 2000 census, African-Americans make up less than 40 percent of the town's residents.

The history of Highland Beach is recounted in the book, The Land Was Ours: African American Beaches from Jim Crow to the Sunbelt South, by Andrew W. Kahrl.

There were 46 households, of which 19.6% had children under the age of 18 living with them, 43.5% were married couples living together, 8.7% had a female householder with no husband present, 6.5% had a male householder with no wife present, and 41.3% were non-families. 30.4% of all households were made up of individuals, and 15.2% had someone living alone who was 65 years of age or older. The average household size was 2.09 and the average family size was 2.56. 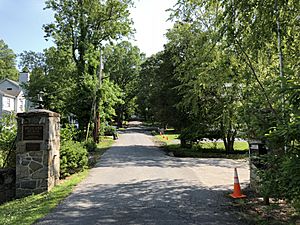 The only entrance to Highland Beach, at the end of Bay Highlands Drive

The main method of transportation to and from Highland Beach is by road. However, no state highways serve the town, and the only road providing access is Bay Highlands Drive.

All content from Kiddle encyclopedia articles (including the article images and facts) can be freely used under Attribution-ShareAlike license, unless stated otherwise. Cite this article:
Highland Beach, Maryland Facts for Kids. Kiddle Encyclopedia.