A United Parcel Service facility, known as CACH, is located in Hodgkins at 1 UPS Way. CACH employs over 9,000 people and is the "largest package sorting center in the world".

There were 841 households, out of which 24.4% had children under the age of 18 living with them, 39.8% were married couples living together, 8.9% had a female householder with no husband present, and 44.1% were non-families. 36.7% of all households were made up of individuals, and 17.1% had someone living alone who was 65 years of age or older. The average household size was 2.54 and the average family size was 3.41.

The first European visitors to present-day Hodgkins, explorers Jacques Marquette and Louis Joliet, paddled down the Des Plaines River in 1673, passing through the area, making their camp in present-day Summit. Settlement in the area, however, was somewhat stagnant until the early 19th century. It was at this time, around 1836, that Irish and Italian immigrants came to the area to work on the Illinois and Michigan Canal. The construction and eventual operation of the canal was responsible for the formation of many villages presently located along its banks, including Hodgkins. The I&M Canal is still in existence, located about 1 mile (1.6 km) south of Hodgkins. The canal and its adjacent land, now known as the I&M Canal National Heritage Corridor, was designated a National Heritage Corridor by Congress in 1984. The I&M Canal National Heritage Corridor is rich in historic sites, nature preserves, and wildlife, and stretches from Chicago to LaSalle-Peru.

The village of Hodgkins was originally known as Gary, a name locals claim was derived from "Garibaldi", in recognition of the large number of Italian laborers working in an area grain mill. After several name changes, the Village of Hodgkins was incorporated in 1896. Jefferson Hodgkins, the president of the Kimball and Cobb Stone company, which was also the first business to locate in the village, was the man for whom Hodgkins was named. Modesto Lenzi, the somewhat dubious "King of Gary", became the village's first president that same year.

In the 1950s and 1960s, Hodgkins began to attract motor freight terminals. The village's location relative to expressways and the availability of high, flat, and dry land made it a natural distribution and transfer point between Chicago and the rest of the nation. Hodgkins grew substantially during these two decades; however, by the late 1970s, the motor freight industry began to decline.

In 1985, Hodgkins joined with the village of McCook to create the McCook-Hodgkins Enterprise Zone. The next year saw the creation of a Tax Increment Finance (TIF) District within the Enterprise Zone. Both of these tools allowed the village to offer incentives to new businesses desiring to locate there. As a result of these programs, commercial business began to replace motor freight as Hodgkins' mechanism of growth. Developers built a major local shopping center, The Quarry Mall, on land vacated by the declining motor freight companies in 1992. Several auto dealerships, restaurants, a movie theater and an off-track betting establishment were also attracted to the development. The crown jewel of the Enterprise Zone, however, is the United Parcel Service (UPS) package sorting facility built in 1991.

The village's name comes from a local landowner and businessman, Jefferson Hodgkins, and is unrelated to the discoverer of Hodgkin's lymphoma, Thomas Hodgkin.

The Kimball and Cobb Stone Quarry, organized in 1888, was the first major business in the area that would later become Hodgkins. The establishment of this business was the first concrete step in permanent settlement of the village. The president of the Kimball and Cobb Stone Quarry was Jefferson Hodgkins, the man for whom the village was named. The secretary of the company was Frederic Cobb, the man whose name was given to Cobb Street.

Hodgkins, a quarryman and crushed stone contractor, was born in Lamoine, Maine, on October 27, 1843. Hodgkins went through the public schools of Lemoine. After leaving school at the age of 17, he became a sailor. Hodgkins spent eight years in this vocation, sailing out of both New York and Boston, except for one year when he served as a private in Company C 26th Maine Volunteers during the Civil War.

Hodgkins worked for the federal government in surveying projects in 1869 and 1870. He came to Chicago in 1872 and became superintendent of the Chicago Dredging and Dock Company for several years, later contracting business for himself. It was in 1885, while president of the Brownell Improvement Company, that Hodgkins organized the Kimball and Cobb Stone Company. Three years later, he bought the company and consolidated it with his own. The newly merged improvement company owned stone quarries, manufactured crushed stone and contracted primarily railway work.

Hodgkins was active socially and in politics. In addition to other posts, Hodgkins served as aide-de-camp on Illinois Governor Joseph W. Fifer's staff, holding the rank of Colonel.

It is unclear exactly how Hodgkins' name came to replace Gary as the village's moniker. Throughout its history, Hodgkins has been known by several different names. In the years before settlers began to arrive, the Potawatomi people lived in the area near the Des Plaines River. From 1836 transient workers were brought to the area to work on the I&M Canal; however, it was not until 1860, when the United States government deeded property to a local settler, Hurls Polk, that the name "Polk" was given to the area. When the Santa Fe Depot was built in 1887, the name of the stop was "Novak". By 1890, the Atchison, Topeka and Santa Fe Railroad listed the stop in present-day Hodgkins as "Gary". this designation would stick until July 1, 1896, when the village of Hodgkins was incorporated.

Quarrying continues today at the Vulcan Materials Company McCook Quarry, with a total of 650 acres (260 ha) in Hodgkins and McCook.

A conference was held after this meeting with Rev. Herman Meyer of Willow Springs. Rev. Meyer was strongly in favor of the movement and immediately set about to conduct the first Lutheran worship services in Hodgkins, in the old Village Hall in the spring of 1911. On April 23, 1911, twenty-six men gathered together in the same hall, along with Rev. Ullrich and Rev. Meyer, and formally organized Immanuel Evangelical Lutheran Church of Hodgkins, Illinois. The newly formed congregation adopted a constitution and called Rev. Meyer as its pastor. Rev. Ullrich was called as the assistant pastor. 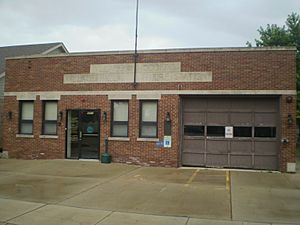 The Old Hodgkins Village Hall & Fire Station was erected in 1940 to replace the original which was destroyed by fire. The refurbished building stands at 6511 Kane Avenue and is home to the Village of Hodgkins Historical Society.

From the early days of the village, Hodgkins maintained its own fire fighting capabilities, going from an organized bucket brigade that assembled at the ringing of the large bell atop the original wood frame Village Hall at the turn of the 20th century, to a Volunteer Fire Department with two full-time firefighters augmented by other volunteers who manned three fire engines.

Since 1976, Hodgkins has been served by the Pleasantview Fire Protection District which began with one engine in 1946 and has grown into a top-notch organization since then. It now serves a large area in the southwest suburbs of Chicago. It is administered by its own board of trustees made up of citizens living in its geographical district who are elected by voters in the district. The fire district currently maintains three stations throughout its coverage area.

The district maintains professional, full-time firefighting crews at all three stations including paramedics for its ambulances. The Pleasantview Fire Protection District is also an integral member of a large Mutual Aid Association of fire fighters, paramedics, and rescue workers throughout the area.

All content from Kiddle encyclopedia articles (including the article images and facts) can be freely used under Attribution-ShareAlike license, unless stated otherwise. Cite this article:
Hodgkins, Illinois Facts for Kids. Kiddle Encyclopedia.