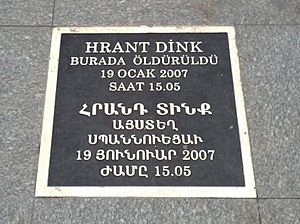 In memorial of Hrant Dink

As editor-in-chief of the bilingual Turkish-Armenian newspaper Agos (Ակօս), Dink was a prominent member of the Armenian minority in Turkey.

Hrant Dink was assassinated in Istanbul on 19 January 2007, by Ogün Samast, a 17 year old ultra-nationalist Turk.

A panorama from Halaskargazi boulevard. One hundred thousand mourners marched in Dink's funeral, protesting his assassination. The office of the Agos newspaper, where Dink was gunned down, is near the right edge of the image; it is in the first house to the right from the one with a large black banner hanging down.

All content from Kiddle encyclopedia articles (including the article images and facts) can be freely used under Attribution-ShareAlike license, unless stated otherwise. Cite this article:
Hrant Dink Facts for Kids. Kiddle Encyclopedia.