Hubert Anton Casimir Dilger (March 5, 1836 – May 4, 1911) was a German-American who became a decorated artillerist in the Union Army during the American Civil War. He was noted as one of the finest artillerists in the Army of the Potomac and received the Medal of Honor for his valiant work at the 1863 Battle of Chancellorsville.

Dilger was born in Engen in the Black Forest region in Germany and educated in the Karlsruhe Military Academy. He served as a lieutenant in the Grand Duke's Horse Artillery at military posts in Gottesau, Karlsruhe, and Rastatt. He developed several innovative theories on artillery tactics and drill.

When news came of the outbreak of the American Civil War, Dilger received a leave of absence and sailed to the United States." 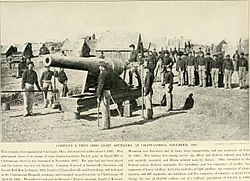 After relocating to Cincinnati, Ohio, he became the captain of Battery I, 1st Ohio Light Artillery and fought at several battles of the Army of the Potomac, including under fellow German native Major General Carl Schurz at the Second Battle of Bull Run.

On May 2, 1863, Dilger fought in the rearguard of the retreating Union XI Corps during the disastrous Battle of Chancellorsville, for which he eventually was awarded the nation's highest decoration in 1893. He unlimbered his battery of six 12-pounder Napoleon smoothbore cannon as a last-ditch defense against a large portion of Stonewall Jackson's entire corps, which had pushed back XI Corps and was threatening to roll up the Union line.

Dilger also received high praise in the Official Records of the Battle of Gettysburg and for his work in the 1864 Atlanta Campaign during which his battery fired the rounds that killed Lt. General Leonidas Polk. Late in the war, he was on garrison duty.

After the war, Dilger prospered in Ohio and eventually purchased a sprawling horse farm in the Shenandoah Valley near Front Royal, Virginia, where he raised his family. After his death, a portion of his farm was purchased by the US Army as part of the creation of the Front Royal Remount Quartermaster Depot.

His son Anton Dilger waged biological warfare for Germany against a still-neutral United States in World War I, infecting horses with anthrax and glanders.

Dilger is buried in Rock Creek Cemetery, in Washington, DC

All content from Kiddle encyclopedia articles (including the article images and facts) can be freely used under Attribution-ShareAlike license, unless stated otherwise. Cite this article:
Hubert Dilger Facts for Kids. Kiddle Encyclopedia.