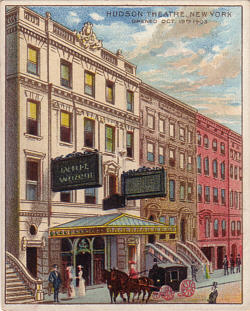 The Hudson Theatre is a Broadway theater located at 139–141 West 44th Street, between Times Square and 6th Avenue, New York City. Opened in 1903, it became a leading theatrical venue before also serving in later years as a network radio and television studio, a night club, a movie theater, and a corporate event space.

The Hudson Theatre reopened as a Broadway theater on February 11, 2017. The UK-based Ambassador Theatre Group (ATG) signed a long-term lease on the theater in 2015 and invested in a complete refurbishment of the venue, bringing it back into full-time use as a Broadway playhouse. The theater is owned by Millennium & Copthorne Hotels.

In 2016, the Hudson Theatre was listed on the National Register of Historic Places.

The architectural firm of J. B. McElfatrick & Son made initial drawings for the Hudson Theatre in 1902, but the firm of Israels & Harder took the project over by 1903. When the Hudson opened, on October 19 of that year with Ethel Barrymore starring in Cousin Kate, it had a number of distinctive architectural features, including an unusually large foyer, a triple-domed ceiling, and a system of diffused lighting. Built by theatrical producer Henry B. Harris, the theatre was later managed by his wife Renee Harris following his death on the RMS Titanic.

From the 1930s through the 1940s, the theater often served as a CBS Radio studio in between theatrical engagements. In 1950, NBC purchased the theater and converted it for permanent use as a television studio. Broadway Open House, The Kate Smith Hour, and the first season of The Price Is Right were among the shows that originated there. In 1954, the Hudson became home to The Tonight Show which remained there, first with host Steve Allen and later Jack Paar, until 1959.

Developer Abraham Hirschfeld purchased the structure in 1956, and returned it to use as a legitimate theater from 1960 to 1968. It became a movie house for adult films in 1974. Then in 1980, it became the Savoy rock club. In 1987, the building was granted landmark status by the City of New York.

When owner Henry Macklowe developed the surrounding lots into a new luxury hotel, the Macklowe Hotel, he incorporated the landmarked theater, using it as a conference center and auditorium. Millennium & Copthorne Hotels bought the hotel and the Hudson in 1995, renaming the hotel the Millennium Broadway. During its time as a conference center for the hotel, it was also the site of stand-up comedy shows which were taped for broadcast on the Comedy Central cable network.

In 2015, it was announced that the British-based Ambassador Theatre Group would assume management of the Hudson from the hotel and convert it back into a legitimate Broadway theater. Upon reopening in 2017, the Hudson became the 41st theater operating on Broadway and also the oldest, having originally opened slightly earlier in 1903 than the Lyceum and New Amsterdam Theatres. The Tony Awards Administration Committee ruled in October 2016 that the Hudson Theatre is deemed to be a Tony-eligible theatre, with "970 seats without the use of the orchestra pit and 948 seats when the orchestra pit is utilized by a production."

The Hudson reopened as a Broadway theater in 2017 with a revival of the Stephen Sondheim musical Sunday in the Park with George. The limited 10-week run featured Jake Gyllenhaal and opened February 11 for previews with an official opening on February 23, 2017. Gyllenhaal and his co-star Annaleigh Ashford participated in a ribbon-cutting ceremony for the theater on February 8, 2017.

The Hudson, along with all Broadway Theatres, closed on March 12, 2020 due to the COVID-19 pandemic in New York City.

All content from Kiddle encyclopedia articles (including the article images and facts) can be freely used under Attribution-ShareAlike license, unless stated otherwise. Cite this article:
Hudson Theatre Facts for Kids. Kiddle Encyclopedia.