The Huntley Mountain Formation is a late Devonian and early Mississippian mapped bedrock unit in Pennsylvania, in the United States. 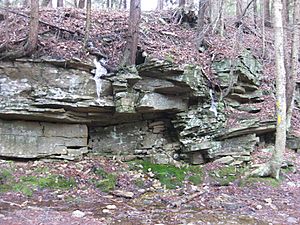 The formation is composed of relatively soft grayish-red shale and olive-gray sandstone. It is located in north central Pennsylvania.

The Haystacks are enigmatic mounds of sandstone that outcrop in Loyalsock Creek south of Dushore in Sullivan County. They are a single bed of quartz sandstone with an undulating upper surface with up to one meter relief. The origin of the mounds is debatable.

Geologist William E. Edmunds argues that the Huntley Mountain Formation is laterally equivalent to the Rockwell Formation (originally described in West Virginia) and the Spechty Kopf Formation. He proposes that the Pocono Formation be reinstated as "the dominantly non-red, non-marine clastic sequence between the Catskill and Mauch Chunk Formations", with the Huntley Mountain, Beckville, Burgoon, Rockwell, Mt. Carbon, and Spechty Kopf Formations demoted to the status of members of the Pocono Formation. Other workers support this interpretation.

All content from Kiddle encyclopedia articles (including the article images and facts) can be freely used under Attribution-ShareAlike license, unless stated otherwise. Cite this article:
Huntley Mountain Formation Facts for Kids. Kiddle Encyclopedia.