Kids Encyclopedia Facts
Not to be confused with Illinois Country. 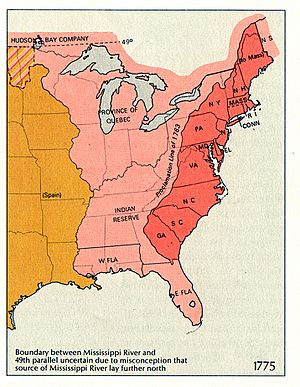 A portion of the British Province of Quebec, south of the Great Lakes, briefly became Illinois County, Virginia, during the American Revolution

Illinois County, Virginia, was a political and geographic region, part of the British Province of Quebec, claimed during the American Revolutionary War on July 4, 1778 by George Rogers Clark of the Virginia Militia, during the Illinois Campaign. It was formally recognized by the Commonwealth of Virginia later that year. The County was accorded official governmental existence, including legally defined boundaries and a formal governmental structure under the laws of the Commonwealth. The county seat was the old French village of Kaskaskia. Its existence also has a defined end-point in 1784, when the Commonwealth of Virginia ceded the land to the new United States federal government. The area later became part of the Northwest Territory by an Act of Congress in 1787. The county was bordered to the southeast by the Ohio River at the time of its existence. It is not within the boundaries of the modern-day state of Virginia.

All content from Kiddle encyclopedia articles (including the article images and facts) can be freely used under Attribution-ShareAlike license, unless stated otherwise. Cite this article:
Illinois County, Virginia Facts for Kids. Kiddle Encyclopedia.