The Inventory of Henry VIII compiled in 1547 is a list of the possessions of the crown, now in the British Library as Harley MS 1419.

The inventory was made following a commission of 14 September 1547 during the first year of the reign of Edward VI of England. The surviving manuscripts list the possessions of Henry VIII item by item, by their location in houses. The armaments of ships and forts are also recorded. Altogether there are 17,810 items listed, and some of these entries contain multiple objects. Despite this abundance, only a very small number of objects survive and can be identified. The monetary values of the objects were not recorded, though the weights of many gold and silver items were given.

The three original manuscripts of the Inventory are; Society of Antiquaries MS 129A & B, and a duplicate copy at British Library Additional MS 46348; and British Library Harley MS 1419A & B. BL Add. MS 46348 was used in the Tower of London after the inventory was compiled to track changes in the royal collections and contains later annotations.

These manuscripts were edited and published in full for the first time in 1998. The published transcription allotted each item an index number to facilitate further study. The team of editors provided a thematic index of generic headings in alphabetical order. Within the index many heading provide short glossaries. This indexing solution to the large number of royal possessions has itself a helpful introduction running to three and half pages.

Another manuscript lists the ships of Henry VIII's navy; the three Anthony Rolls are kept by Magdalene College, Cambridge, and the British Library, and were published in 2000. Partial details of the royal library and other separate inventories of the King's books were also published in 2000. The comparable and shorter inventories of James V of Scotland and Mary, Queen of Scots were published in 1815, 1844, 1863 and 2004, from manuscripts in the National Archives of Scotland and British Library.

The Whitehall Palace inventory of 1542

Over 4000 objects at Whitehall Palace in the keeping of Sir Anthony Denny were recorded in 1542. This inventory survives in manuscript the National Archives at Kew, PRO E315/160 and PRO E101/472/2, and at the British Library, BL Lansdowne Rolls 14 & 15. The Whitehall inventory was published in 2004.

Another inventory of 1542 lists wardrobe stuff including tapestries and cushions at Windsor Castle in the keeping of William Tildesley, with later notes up to 1562.

The inventory intended to list all of the late king's jewels, plate, stuff, ordinance, and munition. Commissioners were appointed to view the royal mansion houses, stables, and stores of munition. The sections below sketch aspects of this collection. 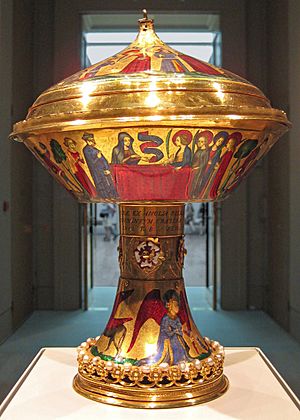 The Royal Gold Cup, 23.6 cm high, 17.8 cm across at its widest point; weight 1.935 kg of solid gold, enamels and jewels, showing Saint Agnes appearing to her friends in a vision.

The inventory has 3690 entries for precious metals and stones. These include a coffer of Catherine Parr's jewels which remained at the Tower of London, amongst its contents were gold headresses set with pearls and diamonds (habillements); girdles with gold links set with diamonds, rubies and pearls; and two jewels fashioned with the initials HK, for Henry and Katherine. One more recent acquisition was the Three Brothers, a pendant of balas rubies, diamonds and pearls bought from Anton Fugger:

"A jewell bought by the kinges Majestie of Anthony fulker and his company of Antewarpe in May 1551 and delivered to t'handes of the Earl of willteshere lorde treasurer of England by the kinges Majestie the VIIth day of June 1551.
A fayer flower of golde having sett in the same three table ballaces sett withowte foyle, and between everey ballace a perle, and in the myddes betwene the three ballaces a large pointed Diamounte and a perle pendaunt at one of the ballaces."

Edward VI was obliged to buy this jewel, which he described in his diary, for 100,000 crowns because the English crown owed £60,000 to the Fugger's bank. The enamelled Royal Gold Cup which survives in the British Museum is listed simply as; "a Cuppe of gold with Imagerie, the knopp a crowne Imperiall and aboute the bordre of the cover and the foote a Crowne garnished with lxii garnishing perles weying lxxix oz," and identified by its original number of pearls. The "knopp a crowne Imperiall" and "the bordre of the cover" with its pearls were lost at some point between the 17th and 19th centuries. Notes in the inventory record diplomatic gifts given and some incidents; in the summer of 1552, Edward VI lost a large pearl pendant from a gold chain while riding between Titchfield and Southampton. The pearl was found and returned in May 1553.

Apart from collections of jewels and the stores of the Royal Wardrobe, items were listed in the houses where they were kept. Henry had 55 different palaces. As well as Henry's major palaces, the contents of his children's homes and wardrobes were listed. These include;

The elaborate furnishing textiles and beds of these houses are listed in detail. Beyond this general magnificence, the inventory hints at Henry VIII's own interests and activities; at Westminster Palace there was a little study called the New Library, with equipment for writing, drawing, painting and surveying. Two shelves held patterns for castles and engines of war, and there was a portfolio for plans, noted as 'a case for a platte covered with leather.' 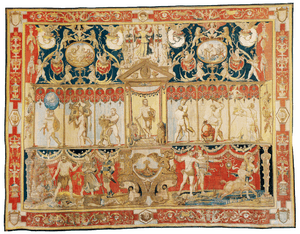 The Triumph of Hercules, part of a series of Antiques woven for Henry VIII

In 1906 the historian and tapestry-maker W. G. Thomson commented on the 1547 inventory that the king, "had a perfect mania for acquiring tapestries by any means that presented itself." Thomson was first to print the full list of tapestries but omitted the dimensions. These were given in English yards, or French and Flemish ells. In total, Thomas P. Campbell estimates the inventory list at approximately 2,450 tapestry wall hangings, and 300 other tapestry furnishings. An entry for one of the newer suites listed in the Wardrobe at Westminster reads;

Amongst the many other furnishing textiles of embroidered silk and brocade in the Wardrobe at Hampton Court there was a crimson bed and a pair of crimson satin cushions embroidered with the arms of James V of Scotland. These items may have been seized at Edinburgh in 1544.

A zibellino, a sable fur accessorized with a gold head and muzzle set with emeralds, turquoises and rubies, with a ruby tongue and four gold feet set with turquoises, had belonged to one of his queens, and was given to Lady Jane Grey. Some of the sable fur bought from Christopher Haller for Henry's wardrobe was sold to Katheryne Adlington. The inventory includes notes of bills and invoices paid by Anthony Cope, the chamberlain of Catherine Parr, to her goldsmiths, embroiderers, mercers, saddler, and her silkwoman Mistress Shakerley. 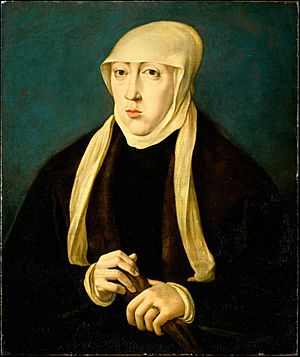 Mary of Hungary (governor of the Netherlands), Jan Cornelisz Vermeyen

Henry VIII had a collection of portraits including two portraits of King Arthur and one of Mary of Hungary, described as "a table of the Quene of Hungrie nowe Regent of Flaunders her hedde tiered in white". He owned a picture of James IV of Scotland, which was almost certainly the work of Meynnart Wewyck.

Henry VIII became infirm in old age and was carried between the rooms of his palaces in chairs called "trauewes". The chairs had a step or "half pace" at the front for two stools. Two were upholstered with tanny velvet. Another "trauewe" was finished in russet velvet, and the fourth in purple velvet. The backs of the chairs were embroidered with a rose with Venice gold thread.

The properties of the Master of Revels, Thomas Cawarden run to 237 items. As well as costumes for court Masques for men and women, and bards (decorative trappings for horses), Cawarden was also keeper of the royal tents. The theatrical props included;

Cawarden's store of tents included lodgings and dining-houses for the King, with furnishings of rich painted and embroidered hangings. Tents from the royal store were issued to the Earl of Warwick for his military campaign to Scotland in the Summer of 1547, including a pavilion and hale (hall tent) of the "King's highness' lesser Lodging," to be used for the commander's field headquarters. (nos.8765-8839) Cawarden had extra expense drying these tents, which came back "from Skotland wetted in the shippe."

Most of the listed musical instruments were kept at Westminster Palace by Philip van Wilder. The decoration distinguished some of the larger pieces. Some were painted in the 'antique manner', decoration in renaissance character incorporating Italianate grotesques. Henry played several instruments, while at Lille in September 1513 with Margaret of Austria before the siege of Tournai, he performed on the lute, harp, lyre, flute, and horn. The inventory included; 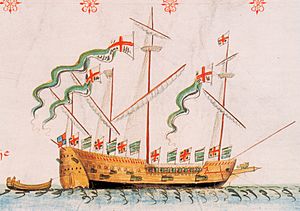 The galley Salamander, in the Anthony Roll

The ship lists includes those at sea and those docked. There are separate entries for munitions and crew. The munitions list records cannon, hand-arms, powder and shot. Crews are numbered as mariners and gunners. Two ships had been captured at Leith in 1544 from the Royal Scots Navy. The listed ships include:

The guns of English coastal fortifications and forts in France are noted. At major establishments the armaments are noted by bulwark and blockhouse. The list was compiled from December 1547 to March 1548 during the war of the Rough Wooing so a number of outposts in the Scottish Borders are recorded; as were some of the Scottish guns captured at the battle of Pinkie. The inventory details body armour supplied from the Hampton Court armoury for the Scottish expedition. There was also iron shot for captured Scottish guns stored at Calais.

Shot, powder, gunnery tools, and other equipment was recorded. Some cannon were old, dangerous, broken, or un-mounted, and the lists noted broken firing chambers for breech-loaders. Some of these broken cannon had burst when firing salutes. The Ordnance house at Calais had accumulated quantities of iron shot of redundant calibre. Equipment at the Tower of London included some exotic pieces and large numbers of decorated ceremonial hand-arms. Most garrisons held Moorish pikes, bills and bows. Armouries and fortified places with royal cannon listed included; 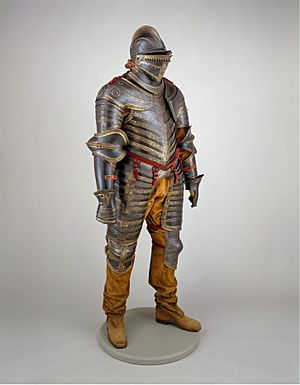 An Italian armour of Henry VIII, now in the Metropolitan Museum of Art 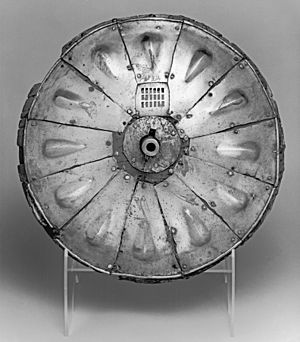 One of Henry's shield and gun combinations, now in the Walters Art Museum 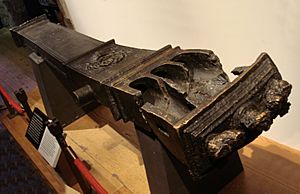 All content from Kiddle encyclopedia articles (including the article images and facts) can be freely used under Attribution-ShareAlike license, unless stated otherwise. Cite this article:
Inventory of Henry VIII Facts for Kids. Kiddle Encyclopedia.