Island Davaar or Davaar Island (Scottish Gaelic: Eilean Dà Bhàrr) is located at the mouth of Campbeltown Loch off the east coast of Kintyre, in Argyll and Bute, Scotland. It is a tidal island, linked to the mainland by a natural shingle causeway called the Dhorlin near Campbeltown at low tide. The crossing can be made in around 40 minutes.

Davaar was known as the island of Sanct Barre between the years 1449 to 1508. The modern form Davaar is from older Do Bharre - thy St Barre. Dr Gillies in his "Place Names of Argyll" appears to accept the popular derivation, Double-pointed (Da-Bharr) Island.

In 1854, Davaar Lighthouse [fr] was built on the north of the island by the lighthouse engineers David and Thomas Stevenson. The lighthouse was automated in 1983, and today, Davaar is inhabited by caretakers, sheep, goats and mink.

The Lookout, a square building standing on a small knoll close to the lighthouse, was built during World War II to house naval crews, whose task it was to stretch anti-submarine nets across the water, protecting Campbeltown. It is now rented out as a holiday home. 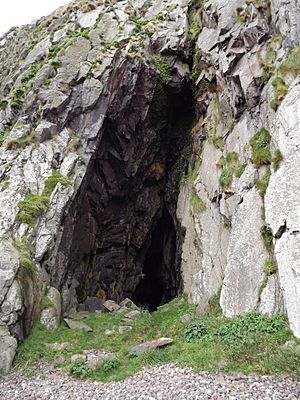 The island is also known for its seven caves, one of which contains a life size cave painting depicting the crucifixion, painted in 1887 by local artist Archibald MacKinnon after he had a vision in a dream suggesting him to do so. The painting caused uproar in the area as it was seen as a sign from God; it is said that when the townsfolk discovered it was MacKinnon, and not God, he was exiled from the town indefinitely. Restored several times since, including twice by the original artist, the painting was vandalised in July 2006, having a red and black depiction of Che Guevara painted over the original masterpiece. It has since been restored again.

There are 2 cottages available to let for holidays.

Local stamps were issued for Davaar in the 1960s. The stamps served the many visitors to the island who wished to have their mail posted there, and carried by the boatman to the nearest GPO Post Box at Campbeltown on the mainland. The boatman service ended some time in the early 1970s. Postage Rates were double those of the UK.

All content from Kiddle encyclopedia articles (including the article images and facts) can be freely used under Attribution-ShareAlike license, unless stated otherwise. Cite this article:
Island Davaar Facts for Kids. Kiddle Encyclopedia.