Ismail Kadare (Albanian: [ismaˈil kadaˈɾe], also spelled Kadaré; born 28 January 1936) is an Albanian novelist, poet, essayist and playwright. He has been a leading literary figure in Albania since the 1960s. He focused on poetry until the publication of his first novel, The General of the Dead Army, which made him famous outside of Albania. In 1996, he became a lifetime member of the Académie des Sciences Morales et Politiques of France.

In 1992, he was awarded the Prix mondial Cino Del Duca; in 2005, he won the inaugural Man Booker International Prize; in 2009, the Prince of Asturias Award of Arts; in 2015, the Jerusalem Prize, and in 2016, he was a Commandeur de la Légion d'Honneur recipient.

Kadare is regarded by some as one of the greatest European writers and intellectuals of the 20th century and, in addition, as a universal voice against totalitarianism.

In English, his works have been translated by David Bellos.

In 1996 Kadare became a lifetime member of the Academy of Moral and Political Sciences of France, where he replaced the philosopher Karl Popper. In 1992, he was awarded the Prix mondial Cino Del Duca, and in 2005 he received the inaugural Man Booker International Prize. In 2009, Kadare was awarded the Prince of Asturias Award for Literature. In the same year he was awarded an Honorary Degree of Science in Social and Institutional Communication by the University of Palermo in Sicily. In 2015, he was awarded the bi-annual Jerusalem Prize.

The London newspaper The Independent said of Kadare: "He has been compared to Gogol, Kafka and Orwell. But Kadare's is an original voice, universal yet deeply rooted in his own soil".

Kadare has been mentioned as a possible recipient of the Nobel Prize in Literature several times. His works have been published in about 45 languages 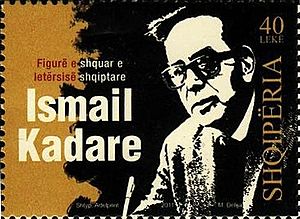 The central theme of his works is totalitarianism and its mechanisms. Kadare's novels draw on legends surrounding the historical experiences of Albanian people, the representation of classical myths in modern contexts, and the totalitarian regime in Albania. They are obliquely ironic as a result of trying to withstand political scrutiny. Among his best-known books are The General of the Dead Army (1963), The Siege (1970), The Ghost Rider (1980), Broken April (1980), The Palace of Dreams (1981), The Pyramid,The Successor (2003).

All content from Kiddle encyclopedia articles (including the article images and facts) can be freely used under Attribution-ShareAlike license, unless stated otherwise. Cite this article:
Ismail Kadare Facts for Kids. Kiddle Encyclopedia.