Ivanhoe is a very small township on the Cobb Highway between the Lachlan and Darling rivers in New South Wales, Australia.  It is located within the Central Darling Shire local government area.  Ivanhoe functions as a service centre for the surrounding area.  The township is characterised by a particularly wide main street. At the 2016 census, Ivanhoe had a population of 196 people.

The town was founded in the early 1870s, and was named after Sir Walter Scott's work of historical fiction, Ivanhoe.  The township was situated on well-used coach and stock routes connecting Wilcannia on the Darling River with Balranald on the Murrumbidgee and Booligal on the Lachlan. 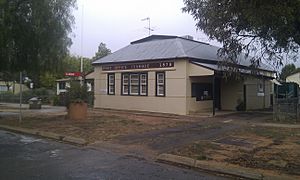 In 1869 George Brown Williamson, the postmaster and a storekeeper at Booligal, purchased 40 acres (16 hectares) from the "Waiko" pastoral run at the site which was to become the township of Ivanhoe.  Williamson selected the location as a business opportunity, being the junction of two roads from Booligal and Balranald leading to Wilcannia on the Darling River.  Williamson began operating a branch store at the location under the charge of his employee Charles Hiller.  George Williamson was a native of Morayshire in Scotland, and is believed to have chosen the name ‘Ivanhoe’.  Initially the nearest water supply to Ivanhoe was at Kilfera Lake, 25 kilometres away, from which drinking water had to be carted by dray.

A hotel was built at Ivanhoe in 1871 (the Ivanhoe Hotel); the licensee was James Eade, who remained publican until 1875 (apart from during 1873 when Joshua Smith held the license).  A post office opened at Ivanhoe on 1 January 1874 at Williamson's store (renamed ‘The Post Office Store’), with Charles Hiller in charge (though Williamson was the designated Postmaster).  On 1 February 1876, after a ten-year stint at Booligal, George Williamson moved to Ivanhoe.  In 1876 two new hotels opened at Ivanhoe: the Horse and Jockey (licensee, Duncan McGregor) and Mac's Ivanhoe Hotel (licensee, Henry Gayson).  The licensee of the Ivanhoe Hotel in 1876 was Roberick MacKenzie.  In 1879 a police presence was maintained at Ivanhoe to protect local residents from the Hatfield Bushrangers.

The Ivanhoe Hotel ceased operating from 1882, leaving two hotels in the township.  During 1882 work commenced on the erection of a telegraph line from Booligal to Wilcannia.  A telegraph station was opened at Ivanhoe on 5 February 1883 under the charge of Alfred Webber Rice, who had been promoted from his position at Campbelltown.  The township was described in 1883 as having about 50 residents, a blacksmith's shop, two hotels, two stores (Williamson's and Stewart's), and "a few cottages".  By 1884 Ivanhoe was a major change-station for Cobb & Co.'s horses on the coach routes to and from the Darling River.  In 1884 businesses in the township included the Cobb & Co. Chaff House and Millie's Stable and Yards (Henry Thomas Millie was the licensee of Mac's Ivanhoe Hotel at that time).  The mounted police were established at Ivanhoe in 1885.  The Ivanhoe Jockey Club held its first race meeting in May 1885.  From 1887 race meetings were held twice a year (until the late 1930s) on a course which formed part of the town common.  In 1889 a school opened in the township. The summer heat was a significant problem for the school. Refrigerating paint and a veranda were used to ward off the sun but the school was closed during the extended drought of 1904 to 1907.

Ivanhoe was officially proclaimed a township in 1890.  A new Post Office building was constructed, which opened in January 1898.  The Ivanhoe Post Office building, though it has been renovated in recent years, still stands adjacent to its original site.

The founder of Ivanhoe, George Williamson, died in 1907.

In 1925 Ivanhoe was linked by railway to Sydney via Parkes.  Two years later the extension to Broken Hill was completed.  The line through Ivanhoe later became part of the transcontinental Indian Pacific railway connecting Sydney to Perth.

The Ivanhoe Heritage Trail provides a good introduction to the town and its history.  At separate sign-posted locations along the trail there are detailed descriptions of (1) the arrival of the railway (2) the Government Tank (3) the Post Office (4) bushrangers (5) watering holes (6) industrial trouble (7) the Cobb Highway and (8) reminiscences.  With the exception of the railway station all sites are located within a block of the main street.  A pamphlet with details of the heritage trail is available from the post office and other retail outlets; a book with more detailed information is also available for purchase.

Ivanhoe Health Service caters to the general Ivanhoe population, as well as to outlying sheep and cattle stations.

The township of Ivanhoe is represented by rugby league team the Ivanhoe Roosters who play in the Group 17 Rugby League competition.

All content from Kiddle encyclopedia articles (including the article images and facts) can be freely used under Attribution-ShareAlike license, unless stated otherwise. Cite this article:
Ivanhoe, New South Wales Facts for Kids. Kiddle Encyclopedia.