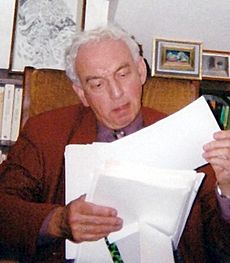 Ivor Grattan-Guinness (23 June 1941 – 12 December 2014) was a English historian and mathematician. He was a historian of mathematics and logic.

Grattan-Guinness was born in Bakewell, Derbyshire. He gained his bachelor degree as a Mathematics Scholar at Wadham College, Oxford, and an MSc (Econ) in Mathematical Logic and the Philosophy of Science at the London School of Economics in 1966. He died on 12 December 2014, aged 73.

All content from Kiddle encyclopedia articles (including the article images and facts) can be freely used under Attribution-ShareAlike license, unless stated otherwise. Cite this article:
Ivor Grattan-Guinness Facts for Kids. Kiddle Encyclopedia.