James Lind (4 October 1716 – 13 July 1794) was a Scottish doctor. He was a pioneer of naval hygiene in the Royal Navy. By conducting one of the first ever clinical trials, he developed the theory that citrus fruits cured scurvy.

Lind argued for the health benefits of better ventilation aboard naval ships, the improved cleanliness of sailors' bodies, clothing and bedding, and below-deck fumigation with sulphur and arsenic. He also proposed that fresh water could be obtained by distilling sea water. His work advanced the practice of preventive medicine and improved nutrition.

Lind was born in Edinburgh, Scotland in 1716 into a family of merchants, then headed by his father, James Lind. He had an elder sister. He was educated at the High School in Edinburgh.

In 1731 he began his medical studies as an apprentice of George Langlands, a fellow of the Incorporation of Surgeons which preceded the Royal College of Surgeons of Edinburgh. In 1739, he entered the Navy as a surgeon's mate, serving in the Mediterranean, off the coast of West Africa and in the West Indies. By 1747 he had become surgeon of HMS Salisbury in the Channel Fleet, and conducted his experiment on scurvy while that ship was patrolling the Bay of Biscay. Just after that patrol he left the Navy, earned his Doctor's degree from the University of Edinburgh Medical School, and was granted a licence to practice in Edinburgh.

Prevention and cure of scurvy

Scurvy is a disease now known to be caused by a vitamin C deficiency, but in Lind's day, the concept of vitamins was unknown. Vitamin C is necessary for the maintenance of healthy connective tissue. In 1740 the catastrophic result of Anson's circumnavigation attracted much attention in Europe; out of 1900 men, 1400 had died, most of them allegedly from having contracted scurvy. According to Lind, scurvy caused more deaths in the British fleets than French and Spanish arms.

Since antiquity in various parts of the world, and since the 17th century in England, it had been known that citrus fruit had an antiscorbutic effect, when John Woodall (1570–1643), an English military surgeon of the British East India Company recommended them but their use did not become widespread. Although Lind was not the first to suggest citrus fruit as a cure for scurvy, he was the first to study their effect by a systematic experiment in 1747. It ranks as one of the first reported, controlled, clinical experiments in the history of medicine, particularly for its use of control groups.

Lind thought that scurvy was due to putrefaction of the body which could be helped by acids, and thus included a dietary supplement of an acidic quality in the experiment. This began after two months at sea when the ship was afflicted with scurvy. He divided twelve scorbutic sailors into six groups of two. They all received the same diet but, in addition, group one was given a quart of cider daily, group two twenty-five drops of elixir of vitriol (sulfuric acid), group three six spoonfuls of vinegar, group four half a pint of seawater, group five received two oranges and one lemon, and the last group a spicy paste plus a drink of barley water. The treatment of group five stopped after six days when they ran out of fruit, but by that time one sailor was fit for duty while the other had almost recovered. Apart from that, only group one also showed some effect of its treatment.

Shortly after this experiment Lind retired from the Navy and at first practised privately as a doctor. In 1753, he published A treatise of the scurvy, which was virtually ignored. In 1758 he was appointed chief physician of the Royal Naval Hospital Haslar at Gosport. When James Cook went on his first voyage he carried wort (0.1 mg vitamin C per 100 g), sauerkraut (10–15 mg per 100 g) and a syrup, or "rob", of oranges and lemons (the juice contains 40–60 mg of vitamin C per 100 g) as antiscorbutics, but only the results of the trials on wort were published. In 1762 Lind's Essay on the most effectual means of preserving the health of seamen appeared. In it he recommended growing salad—i.e. watercress (662 mg vitamin C per 100 g)—on wet blankets. This was actually put in practice, and in the winter of 1775 the British Army in North America was supplied with mustard and cress seeds. However Lind, like most of the medical profession, believed that scurvy was essentially a result of ill-digested and putrefying food within the body, bad water, excessive work and living in a damp atmosphere which prevented healthful perspiration. Thus, while he recognised the benefits of citrus fruit (although he weakened the effect by switching to a boiled concentrated or "rob", the production of which unfortunately destroyed the vitamin C), he never advocated citrus juice as a single solution. He believed that scurvy had multiple causes which therefore required multiple remedies.

The medical establishment ashore continued to be wedded to the idea that scurvy was a disease of putrefaction, curable by the administration of elixir of vitriol, infusions of wort and other remedies designed to 'ginger up' the system. It could not account for the benefits of citrus fruits and dismissed the evidence in their favour as unproven and anecdotal. In the Navy however, experience had convinced many officers and surgeons that citrus juices provided the answer to scurvy even if the reason was unknown. On the insistence of senior officers, led by Rear Admiral Alan Gardner, in 1794 lemon juice was issued on board the Suffolk on a twenty-three-week, non-stop voyage to India. The daily ration of two-thirds of an ounce mixed in grog contained just about the minimum daily intake of 10 mg vitamin C. There was no serious outbreak of scurvy. This astonishing event resulted in a widespread demand within the Navy for lemon juice, backed by the Sick and Hurt Board whose numbers had recently been augmented by two practical naval surgeons who were well aware of Lind's experiment with citrus. The following year the Admiralty accepted its recommendation that lemon juice should be issued routinely to the whole fleet. Another Scot, Archibald Menzies, picked up citrus plants and dropped them off at Kealakekua Bay in Hawaii on the Vancouver Expedition, to help the Navy re-supply in the Pacific. This was not the immediate end of scurvy in the Navy, as lemon juice was at first in such short supply that it could only be used in home waters as a cure under the direction of the surgeons rather than issued routinely as a preventative. Only after 1800 did the supply increase sufficiently so that, on the insistence of Admiral Lord St Vincent, it began to be issued generally.

Lind noticed that typhus disappeared from the top floor of his hospital, where patients were bathed and given clean clothes and bedding. However, incidence was very high on the lower floors where such hygiene measures were not in place. Lind recommended that sailors be stripped, shaved, scrubbed, and issued clean clothes and bedding regularly. As a result, British seamen did not suffer from typhus, giving the British navy a significant competitive advantage over the French.

Fresh water from the sea

In the 18th century sailors took along water, cordial and milk in casks. According to the Regulations and Instructions relating to His Majesty's Service at Sea, which had been published for the first time in 1733 by the Admiralty, sailors were entitled to a gallon of weak beer daily (5/6 of the usual British gallon, equivalent to the modern American gallon or slightly more than three and a half litres). As the beer had been boiled in the brewing process it was reasonably free from bacteria and lasted for months unlike water kept in a cask for the same time. In the Mediterranean, wine was also issued, often fortified with brandy.

A frigate with 240 men, equipped with stores for four months, carried more than one hundred tons of drinkable liquid. Water quality depended on the original source of the water, the condition of the casks and for how long it had been kept. During normal times sailors weren't allowed to take any water away. When water got scarce, it was rationed and rain water was collected with spread sails. Fresh water was also collected when an opportunity presented itself en voyage, but watering places were often marshy, and in the tropics infested with malaria.

In 1759, Lind discovered that the steam of heated salt water was fresh. He also proposed to use solar energy for the distillation of water. But only when a new type of cooking stove was introduced in 1810 did the possibility arise of producing fresh water by distillation on a useful scale.

Lind's final work was published in 1768; the Essay on Diseases Incidental to Europeans in Hot Climates, with the Method of Preventing their fatal Consequences. It was a descriptive work on the symptoms and treatments of tropical disease, and was not specifically related to naval medicine and served more as a general text for doctors and British emigrants. The Essay was routinely used as a medical text in Britain in the fifty years following publication. Seven editions were printed, including two which were produced after Lind's death.

Lind was married to Isabella Dickie and they had two sons – John and James. In 1773 he was living on Princes Street in what was then a brand new house facing onto Edinburgh Castle.

The younger son James served at sea for a number of years, rising to the rank of post-captain, and was notable for his role in the Battle of Vizagapatam in 1804, for which he was knighted.

He died at Gosport in Hampshire, a Knight Commander of the Order of the Bath in 1794. He is buried in St Mary's Parish Churchyard in Portchester. 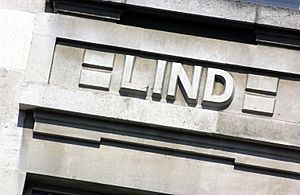 James Lind's is one of twenty-three names to feature on the Frieze of the London School of Hygiene and Tropical Medicine building in Keppel Street, London. Names were selected by a committee of unknown constitution who chose those who were deemed to be pioneers in public health and tropical medicine.

All content from Kiddle encyclopedia articles (including the article images and facts) can be freely used under Attribution-ShareAlike license, unless stated otherwise. Cite this article:
James Lind Facts for Kids. Kiddle Encyclopedia.