Jamestown is a town in Berkeley County, South Carolina, United States. The population was 72 at the 2010 census.

Jamestown is included within the Charleston-North Charleston-Summerville metropolitan area.

According to the United States Census Bureau, Jamestown has a total area of 0.62 square miles (1.6 km2), all of it land. 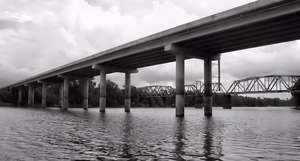 Bridge over the Santee River near boat ramp north of Jamestown

There were 42 households, out of which 33.3% had children under the age of 18 living with them, 35.7% were married couples living together, 31.0% had a female householder with no husband present, and 31.0% were non-families. 28.6% of all households were made up of individuals, and 14.3% had someone living alone who was 65 years of age or older. The average household size was 2.31 and the average family size was 2.83.

Every year Jamestown holds the Hell Hole Swamp Festival on the first full weekend in May. It is a family event with children's games, cocoa-spitting contest (organizers say tobacco was discontinued due to lack of participation), horseshoe pitching, arm wrestling, beauty contests, a parade, talent contest, exhibits (including a confiscated moonshine still, which is also the festival's logo), and arts and crafts. The festival started in 1972, and 2011 was the 40th anniversary. A 10k Gator Run began in 1976 and is billed as the oldest road race in South Carolina; winners get real alligator heads as trophies.

Reputation as a speed trap

Jamestown has garnered a reputation as a speed trap for motorists. As of 2009, Jamestown generates 62% of its annual operating budget ($195,000 of $313,000) through writing tickets. Jamestown uses its placement along an alternate route to popular vacation destination Myrtle Beach to trap unwary drivers. Entering the town, the speed limit drops from 55 miles per hour (89 km/h) to 40 miles per hour (64 km/h). Many motorists complain that the speed limit change is poorly marked. Jamestown police officers often sit in convenience store or church parking lots near the intersection of SC Route 41 and U.S. Highway 17-A, particularly at night, and catch drivers as they slow down to turn. Speeding tickets in Jamestown generally run anywhere from $180 to $300, and drivers can usually avoid having points added to their license by paying anywhere from $50 to $200 extra.

All content from Kiddle encyclopedia articles (including the article images and facts) can be freely used under Attribution-ShareAlike license, unless stated otherwise. Cite this article:
Jamestown, South Carolina Facts for Kids. Kiddle Encyclopedia.