James "Jay" Carney (born May 22, 1965) is an American journalist who served as White House press secretary for President Barack Obama.

From 2014 to 2015, he worked as a senior political analyst at CNN. He served as White House press secretary, from 2011 to 2014, and his resignation was accepted by President Barack Obama, on May 30, 2014. From 2008 to 2011, he was director of communications for Vice President Joe Biden. He worked as the Time Magazine Washington bureau chief, from 2005 to 2008 and was a regular contributor in the segment of This Week with George Stephanopoulos for ABC News.

He has written and reported about the Presidency of George W. Bush, and was one of a few reporters who were aboard Air Force One with Bush on September 11, 2001. In 2003, he won the 2003 Gerald R. Ford prize for distinguished reporting on the presidency of the United States of America. Carney has been the senior vice president of worldwide corporate affairs at Amazon since March 2, 2015.

Carney was raised in Northern Virginia, attended high school at The Lawrenceville School, a college preparatory boarding school in Lawrenceville, New Jersey, and earned a bachelor's degree in Russian and Eastern European studies, from Yale University, New Haven, Connecticut, in 1987.

After working as a reporter for The Miami Herald, since 1987, Carney joined Time magazine as the Miami bureau chief, in 1989. He worked as a correspondent in Time's Moscow bureau for three years, covering the collapse of the U.S.S.R.. He transferred to Washington, D.C., in 1993, to report on the Bill Clinton White House. He was Time magazine's Washington bureau deputy chief, from 2003 to 2005 and the bureau chief, from September 2005, until December 2008. 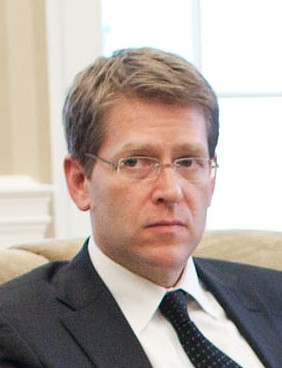 On December 15, 2008, Carney left the private sector to take a position as director of communications to Vice President-elect Joe Biden.

On May 30, 2014, President Barack Obama announced Carney would be succeeded by Josh Earnest.

All content from Kiddle encyclopedia articles (including the article images and facts) can be freely used under Attribution-ShareAlike license, unless stated otherwise. Cite this article:
Jay Carney Facts for Kids. Kiddle Encyclopedia.