The area now known as Kanwal was a subdivision of Warnervale.

Kanwal is said to mean "snakes indeed" in a local Aboriginal language. 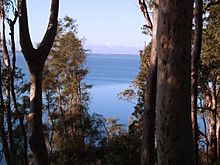 Tuggerah Lake as viewed from Craigie Park. The Entrance is also visible in the distant background.

The dominating feature of Kanwal is the Wyong Rugby League Club to the northeast of the suburb. It is home to the Wyong Roos, a rugby league football club, three sporting ovals, two netball courts and a youth and community centre. There are several parks in Kanwal including Craigie Park to the east facing onto Tuggerah Lake, a wetland area to the northwest and another sporting oval to the south separate from the Rugby League Club. Other landmarks in the area include a small shopping village, a primary school, three aged care facilities, four buildings of religious worship and a caravan park.

The area is serviced by four regular bus routes, operating between Lake Haven Shopping Centre and Wyong railway station or Westfield Tuggerah. All four routes split up in different directions at Kanwal, two servicing the northern and western areas and the other two servicing eastern and southern areas together.

The Newcastle and Central Coast railway line that services some of Sydney, the Central Coast and most of Newcastle passes close by at Warnervale. Warnervale railway station lies approximately 4 km to the west of Kanwal and one of the bus routes mentioned passes it several times a day. However, Wyong railway station also lies approximately 6 km to the southwest, is serviced by all four bus routes frequently and has more train services operating from it, including the CountryLink service.

All content from Kiddle encyclopedia articles (including the article images and facts) can be freely used under Attribution-ShareAlike license, unless stated otherwise. Cite this article:
Kanwal, New South Wales Facts for Kids. Kiddle Encyclopedia.