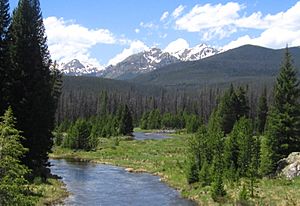 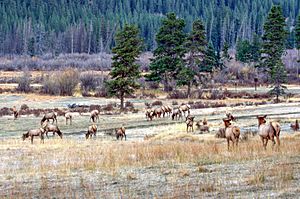 Kawuneeche Valley, also known as Kawuneeche or Coyote Valley, is a marshy valley of the Colorado River near its beginning. It is located on the west side of Rocky Mountain National Park in Colorado. The axis of the valley runs almost directly north to south. Kawuneeche means "valley of the coyote" in Arapaho language and there is a Coyote Valley Trail head by US Route 34 in the western half of the park. Coyotes still live here, as do wapiti (elk), mule deer, moose (reintroduced in 1978 into nearby North Park), and mountain lion.

Along the main part of valley runs the lower section of the Trail Ridge Road - the highest continuous paved road in the United States.

The construction of the a water diversion canal called Grand Ditch between the 1890s and 1930s reduced the water table and limited the frequency and magnitude of the floods in the Kawuneeche Valley. Grand Ditch collects water from Colorado River’s tributaries in the Never Summer Mountains like a rain gutter from the roof and diverts it on the other side of the Continental Divide to the Cache La Poudre River via La Poudre Pass, instead of allowing it to flow down to the valley. In addition, Grand Ditch breached its bank on May 30, 2003 and a resulting debris flow caused extensive injury to the upper Kawuneeche Valley. The Grand Ditch owner - the Water Supply and Storage Company (WSSC) was ordered to pay $9 million settlement to the Rocky Mountain National Park. It was the largest natural resource damages payment in the history of the Park System Resource Protection Act. Grand Ditch exerts also negative aesthetic impact on the Kawuneeche.

Elk (wapiti, Cervus canadensis) was reintroduced to its old stomping grounds in the Colorado River Valley in the mid-1910s.

Moose (Alces alces) was reintroduced by the Colorado Division of Wildlife in the 1970s in North Park, which is just to the northwest of Rocky Mountain National Park, however, significant breeding populations may never have inhabited Colorado. This solitary species wanders alone moving south from Wyoming or east from Utah. And such moose probably account for sightings and kills in Colorado between the 1860s and 1960s. This is an ecological innovation driven largely by state game officials to attract sportsmen and tourists. However, moose are known to undergo dramatic population cycles, which, in combination with European settlement, could account for their scarcity in Colorado before 1978. Populations were known in southern Wyoming's Medicine Bow Mountains.

In 1978 and 1979, 4 bulls, 13 cows, 4 yearlings, and 3 calves were transferred from the Uinta Mountains (Utah) and Grand Teton (Wyoming) to an area near Rand, west of the Never Summer Mountains (Kawuneeche Valley is located just on the east side of this range). All radio collared, 12 each year. And today Kawuneeche Valley is a prime moose habitat, although sightings frequently occur even further, east of the Continental Divide, and even south to the upper Rio Grande valley. 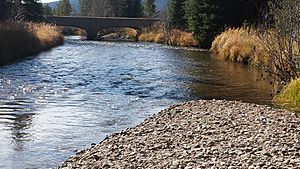 Large herbivores have become so numerous in the Kawuneeche Valley, that they cause significant harm to the willow (Salix spp.) thickets and other plants, on which many other organisms depend. Elk is overpopulated, but rarer moose more specialized - 91.3% of its summer diets consist of six willow species.

This is accompanied by drought (caused by water diversion by Grand Ditch, lack of beavers, global climatic patterns) and the proliferation of a native fungus spread by a bird called the sapsucker (Sphyrapicus spp.). The primary fungus species is Grosmannia clavigera, but Ophiostoma is also present. The fungi kill the stems above the wells drilled by sapsuckers.

All these factors weaken the ability of the valley’s willows to generate new growth, their communities have declined, only few willow plants on the primary winter range produce seed. As a result, fully dependent on twigs and bark on willow stems North American beaver (Castor canadensis), actually living in symbiosis with willow, substantially recovered from fur-trapping by the mid-twentieth century, declined the Kawuneeche. 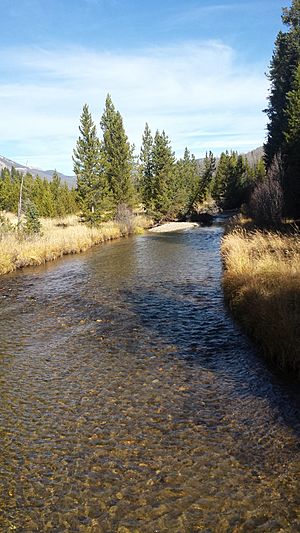 There are a few historical places located in the valley or its vicinity, like:

All content from Kiddle encyclopedia articles (including the article images and facts) can be freely used under Attribution-ShareAlike license, unless stated otherwise. Cite this article:
Kawuneeche Valley Facts for Kids. Kiddle Encyclopedia.