Kearny is a town in Pinal County, Arizona, United States. The town was named after General Stephen Watts Kearny, who passed through the area on November 7, 1846, while leading 100 dragoons to California. According to the 2010 census, the population of the town is 1,950. The economic base of Kearny and nearby towns is the Ray mine and Hayden Smelter, both owned and operated by ASARCO. 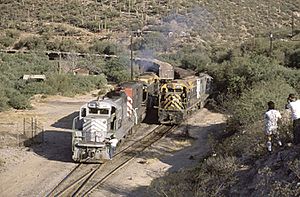 Copper Basin Railway trains at Ray Junction in Kearny, around 1987

Kearny was built by the Kennecott Mining Company in 1958 as a planned community to accommodate the populations of nearby Ray, Sonora and Barcelona, which were about to be swallowed by Kennecott's expanding open-pit copper mine. While many of houses in the town were newly built, some mine employees had their homes moved down the road. Kearny was officially incorporated in 1959.

The town sits near the Gila River in the Copper Basin area along with its sister cities, Hayden and Winkelman. According to the United States Census Bureau, the town has a total area of 2.8 square miles (7.3 km2), all of it land.

According to the Köppen Climate Classification system, Kearny has a warm-summer Mediterranean climate, abbreviated "Csa" on climate maps.

There were 791 households, out of which 34.8% had children under the age of 18 living with them, 65.0% were married couples living together, 9.2% had a female householder with no husband present, and 22.1% were non-families. 19.1% of all households were made up of individuals, and 10.6% had someone living alone who was 65 years of age or older. The average household size was 2.84 and the average family size was 3.25.

Kearny Airport is a general aviation airport located in the southern section of the town. In 2003 it received the Arizona Department of Transportation's Airport of the Year award. The airport has a single asphalt runway, 3,400 feet (1,000 m) in length and 60 feet (18 m) in width, with a field elevation of 1,833 feet (559 m) above mean sea level.

Kearny is part of the Ray Unified School District, made up of two schools: Ray Junior-Senior High School, and Ray Elementary School.

All content from Kiddle encyclopedia articles (including the article images and facts) can be freely used under Attribution-ShareAlike license, unless stated otherwise. Cite this article:
Kearny, Arizona Facts for Kids. Kiddle Encyclopedia.