Kirkby-in-Ashfield is a market town in the Ashfield District of Nottinghamshire, England. With a population of 25,265 (according to the 2001 National Census), it is a part of the wider Mansfield Urban Area. The Head Offices of Ashfield District Council are located on Urban Road in the town centre.

Kirkby-in-Ashfield lies on the eastern edge of the Erewash Valley which separates Nottinghamshire and Derbyshire. Kirkby, as it is locally known, was originally a Danish settlement (Kirk-by translates as 'Church Town' in Danish) and is a collection of small villages including Old Kirkby, The Folly (East Kirkby), Nuncargate and Kirkby Woodhouse. It is mentioned in the Domesday Book and has two main churches: St Wilfrid's, a Norman church, which was gutted by fire on 6 January 1907 but quickly re-built to its former glory; and St Thomas's, built in the early 1910s in neo-gothic style.

Kirkby-in-Ashfield was once an important centre of coal mining and railways in west Nottinghamshire, with three active coal mines and several railway junctions. The former Mansfield and Pinxton Railway from the Erewash Valley Line was joined here by the later Midland Railway line from Nottingham. The Great Central Railway main line passed to the south-west side of the town and had a double junction with the Great Northern Railway Leen Valley Extension line to Langwith Junction and the Mansfield Railway to Clipstone.

The town rapidly expanded during the Victorian era. However the closure of the coal mines in the 1980s and early 1990s led to a major slump in the local economy, and the area then suffered a high level of socio-economic depression. 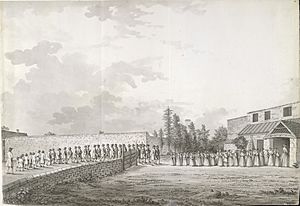 'Kirkby in Ashfield education in the eighteenth century as drawn by Samuel Hieronymus Grimm.' 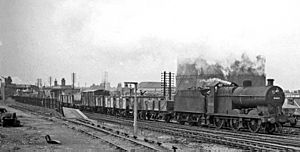 The railways were closed during the Beeching era of the early 1960s when branch-line passenger services suffered widespread disruption, leaving the town without a link to central Nottingham and nearby Mansfield. The railway tracks were re-opened to passengers in the 1990s as part of the Robin Hood Line, providing links to other North Nottinghamshire towns and to Nottingham where a transport interchange allows transfer to the trams of Nottingham Express Transit system.

The town centre is undergoing a renovation during late 2014 and 2015 including the demolition of the old Co-Operative foodstore and county library with surrounding plaza, to be rebuilt with a central Morrisons store, and is progressively changing from a traditional mining town to a commuter town for the surrounding areas, however the transition from industrial centre to dormitory town is in its infancy and will take some years to develop. 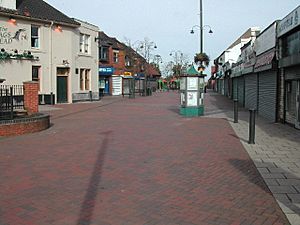 Local politics have been dominated by the Labour Party for much of the 20th century, however Ashfield attracted media attention in the late 1970s with a shock by-election win for the Conservatives. Since the 2010 General Election, the MP has been Gloria De Piero, best known for her work with GMTV. She took over from Geoff Hoon, one-time Secretary of State for Defence during the premiership of Tony Blair. She was elected with a very slim majority of 192 votes from the Liberal Democrats' Jason Zadrozny.

The town's most famous historical resident is Harold Larwood; the England cricketer who was born in Nuncargate in 1904, best known for his bodyline bowling in the Ashes Test series of 1932–33.

The area around St Wilfrid's Church is designated a conservation area,

On the edge of Kirkby[where?] is Portland Park (known to local people as "the quarries") a mixture of woodland and grassland areas which, together with a number of small ponds and streams, are home to a wide variety of wildlife. The visitor centre there was opened in October 1994, and is an environmentally friendly building and a centre of excellence for energy conservation.

The 1981 series of TV programmes 'Shillingbury Tales' were based on old Kirkby, as the writer Francis Essex's aunt lived nearby.

All content from Kiddle encyclopedia articles (including the article images and facts) can be freely used under Attribution-ShareAlike license, unless stated otherwise. Cite this article:
Kirkby-in-Ashfield Facts for Kids. Kiddle Encyclopedia.