Kugel (Yiddish: קוגל kugl, pronounced) is a baked pudding or casserole, most commonly made from egg noodles (לאָקשן קוגל lokshen kugel) or potato. It is a traditional Ashkenazi Jewish dish, often served on Shabbat and Jewish holidays. It is also a popular dessert among Roma people.

The name of the dish comes from the Middle High German kugel meaning 'sphere, globe, ball'; thus the Yiddish name likely originated as a reference to the round, puffed-up shape of the original dishes (compare to German Gugelhupf—a type of ring-shaped cake). Nowadays, however, kugels are often baked in square pans. 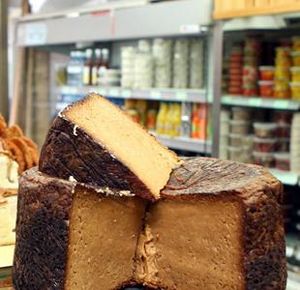 The first kugels were made from bread and flour and were savory rather than sweet. About 800 years ago, Jewish cooks in Germany replaced bread mixtures with noodles or farfel. Eventually eggs were incorporated. The addition of cottage cheese and milk created a custard-like consistency common in today's dessert dishes. In Poland, Jewish homemakers added raisins, cinnamon and sweet curd cheese to noodle kugel recipes. In the late 19th century, Jerusalemites combined caramelized sugar and black pepper in a noodle kugel known as Yerushalmi kugel or 'Jerusalem kugel' (Hebrew: קוגל ירושלמי), which is a commonly served at Shabbat kiddushes and is a popular side dish served with cholent during Shabbat lunch.

In Romania, this dish is called Budinca de macaroane ('macaroni pudding') or Baba acolo. It is made with or without cheese, but almost always includes raisins. In Transylvania, especially in the Hungarian-speaking regions, a very similar dish is called Vargabéles.

Savory kugel may be based on potatoes, matzah, cabbage, carrots, zucchini, spinach or cheese.

While noodle kugel, potato kugel, and other variations are dishes served on Jewish holiday meals, matzo kugel is a common alternative served at Passover seders which is adjusted to meet Passover kosher requirements.

Among South African Jews, the word kugel was used by the elder generation as a term for a young Jewish woman who forsook traditional Jewish dress values in favor of those of the ostentatiously wealthy, becoming overly materialistic and over groomed, the kugel being a plain pudding garnished as a delicacy. The women thus described made light of the term and it has since become an amusing rather than derogatory slang term in South African English, referring to a materialistic young woman.

Romani people call it pirogo. The Romani version is made with raisins, cream cheese, and butter.

All content from Kiddle encyclopedia articles (including the article images and facts) can be freely used under Attribution-ShareAlike license, unless stated otherwise. Cite this article:
Kugel Facts for Kids. Kiddle Encyclopedia.