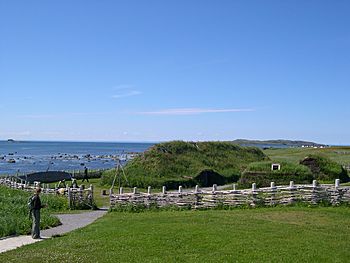 Reconstruction of the Viking settlement

L'Anse aux Meadows is a historical settlement on the island of Newfoundland in eastern Canada. It was settled by Vikings from Greenland, Iceland, and Norway around the year 1000, almost 500 years before Christopher Columbus came to the Americas. It is the only known Viking place in North America outside of Greenland. The remains of the settlement were discovered in 1960, and were declared a UNESCO World Heritage Site in 1978.[1]

All content from Kiddle encyclopedia articles (including the article images and facts) can be freely used under Attribution-ShareAlike license, unless stated otherwise. Cite this article:
L'Anse-aux-Meadows Facts for Kids. Kiddle Encyclopedia.