Lake Wilcox is a kettle lake in the Oak Ridges neighbourhood of Richmond Hill, Ontario, Canada. The lake measures 1.5 kilometers across and covers 55.6 hectares or 0.55 square kilometres, making it the largest kettle lake on the Oak Ridges Moraine. Lake Wilcox, Lake St. George and their associated wetlands form a "provincially significant wetland".

The lake is named after William Willcocks (1735/36-1813), who was a merchant in York, Upper Canada and became mayor of Cork, Ireland in 1793 (after his return from Upper Canada). Willcocks and his family moved to Upper Canada, where his cousin Peter Russell became interim administrator after the departure of John Graves Simcoe in 1796. Willcocks "was an active land speculator" who acquired significant holdings in Upper Canada, including 800 acres (3.2 km2) surrounding the lake. The name of the lake was originally Lake Willcocks, but it was corrupted over time to its present spelling.

Willcocks resides in York and Markham, but died in the former in 1813. 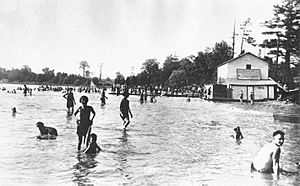 The lake was recorded as "Lake Wilcocks" on an 1878 map in the Illustrated historical atlas of the county of York and the township of West Gwillimbury & town of Bradford in the county of Simcoe, Ont.

Wilcox Lake is part of the Humber River drainage system, draining into the East Humber River. The drainage basin of the lake covers 260 hectares. The maximum depth of the lake is 17.4 meters.

Wilcox Lake, Lake St. George, Swan Lake and Haynes Lake and their associated marshes, swamps and forests form a large wetland designated as a Provincially Significant Wetland. The total complex has some ninety individually identified wetlands, covering 102 hectares, of which 57% is classified as swamp, 39% as marsh and 4% as bog.

Beginning in 1997, the town of Richmond Hill undertook a project to restore the lake's condition, which had degraded because of pollution and development. Septic systems which had previous drained into the lake were connected to sewers and lake lungs were installed to increase oxygenation of the water. High phosphorus levels in the lake remain problematic.

The town of Richmond Hill maintains three municipal recreational parks along the shores of Lake Wilcox. These are Jesse Vanek Park, Lake Wilcox Park (previously known as Sunset Beach Park), and North Shore Parkette. The Lake Wilcox Fish and Wildlife Refuge is left in a natural state. The lake itself is used for fishing, windsurfing, kayaking, and boating.

All content from Kiddle encyclopedia articles (including the article images and facts) can be freely used under Attribution-ShareAlike license, unless stated otherwise. Cite this article:
Lake Wilcox Facts for Kids. Kiddle Encyclopedia.