Echinacea /ˌɛkᵻˈneɪʃiə/ is a genus of herbaceous flowering plants in the daisy family. It has ten species, which are commonly called coneflowers. They are found only in eastern and central North America, where they grow in moist to dry prairies and open wooded areas. They have large, showy heads of composite flowers, blooming in summer. The generic name is derived from the Greek word ἐχῖνος (ekhinos), meaning "sea urchin", due to the spiny central disk. These flowering plants and their parts have different uses. Some species are cultivated in gardens for their showy flowers. Echinacea purpurea is used in traditional medicine. Two of the species, E. tennesseensis and E. laevigata, are listed in the United States as endangered species. 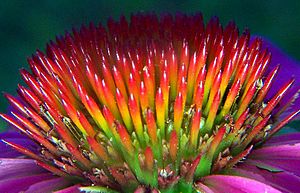 The spiny center of the head showing the paleae, from which the name derives 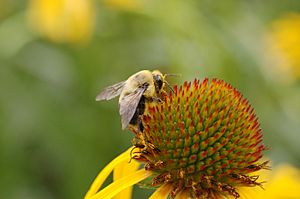 A bee on an Echinacea paradoxa head (inflorescence) 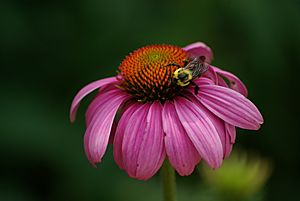 A bee on an Echinacea purpurea head

Echinacea species are herbaceous, drought-tolerant perennial plants growing up to 140 cm or 4 feet, in height. They grow from taproots, except E. purpurea, which grows from a short caudex with fibrous roots. They have erect stems that in most species are unbranched. Both the basal and cauline (stem) leaves are arranged alternately. The leaves are normally hairy with a rough texture, having uniseriate trichomes (1–4 rings of cells) but sometimes they lack hairs. The basal leaves and the lower stem leaves have petioles, and as the leaves progress up the stem the petioles often decrease in length. The leaf blades in different species may have one, three or five nerves. Some species have linear to lanceolate leaves, and others have elliptic- to ovate-shaped leaves; often the leaves decrease in size as they progress up the stems. Leaf bases gradually increase in width away from the petioles or the bases are rounded to heart shaped. Most species have leaf margins that are entire, but sometimes they are dentate or serrate.

The flowers are collected together into single rounded heads at the ends of long peduncles. The inflorescences have crateriform to hemispheric shaped involucres which are 12–40 mm wide. The phyllaries, or bracts below the flower head, are persistent and number 15–50. The phyllaries are produced in a 2–4 series. The receptacles are hemispheric to conic. The paleae (chaffs on the receptacles of many Asteraceae) have orange to reddish purple ends, and are longer than the disc corollas. The paleae bases partially surrounding the cypselae, and are keeled with the apices abruptly constricted to awn-like tips. The ray florets number 8–21 and the corollas are dark purple to pale pink, white, or yellow. The tubes of the corolla are hairless or sparsely hairy, and the laminae are spreading, reflexed, or drooping in habit and linear to elliptic or obovate in shape. The abaxial faces of the laminae are glabrous or moderately hairy. The flower heads have typically 200–300 fertile, bisexual disc florets but some have more. The corollas are pinkish, greenish, reddish-purple or yellow and have tubes shorter than the throats. The pollen is normally yellow in most species, but usually white in E. pallida. The three or four-angled fruits (cypselae), are tan or bicolored with a dark brown band distally. The pappi are persistent and variously crown-shaped with 0 to 4 or more prominent teeth. x = 11.

Like all members of the sunflower family, the flowering structure is a composite inflorescence, with rose-colored (rarely yellow or white) florets arranged in a prominent, somewhat cone-shaped head – "cone-shaped" because the petals of the outer ray florets tend to point downward (are reflexed) once the flower head opens, thus forming a cone. Plants are generally long lived, with distinctive flowers. The common name "cone flower" comes from the characteristic center "cone" at the center of the flower head. The generic name Echinacea is rooted in the Greek word ἐχῖνος (echinos), meaning hedgehog, in reference to the spiky appearance and feel of the flower heads.

DNA analysis is applied to determine the number of Echinacea species, allowing clear distinctions among species based on chemical differences in root metabolites. The research concluded that of the 40 genetically diverse populations of Echinacea studied, there were ten distinct species.

Well-controlled clinical trials are limited and low in quality. Although there are multiple scientific reviews and meta-analyses published on the supposed immunological effects of Echinacea, there are significant variability of products used among studies leading to limited conclusions about effects and safety. Consequently, regulatory authorities such as the United States Food and Drug Administration have not approved echinacea safe and effective for any health or medical purposes.

While one 2014 systematic review found that Echinacea products are not effective to treat or prevent the common cold, a 2016 meta-analysis found tentative evidence that use of Echinacea extracts reduced the risk of repeated respiratory infections. A 2015 monograph by the European Medicines Agency stated that oral consumption of "expressed juice" or dried expressed juice of Echinacea could prevent or reduce symptoms of a common cold at its onset. As of 2017, the benefit, if any, appears to be small and thus of little utility.

Based on in-vitro studies, extracts of E. purpurea (Echinaforce®) showed virucidal activity against coronaviruses, including SARS-CoV-2. Because existing data is solely derived from cell cultures, and antiviral effects in humans have not been elucidated, regulatory agencies have not recommended the use of Echinacea preparations for the prophylaxis and treatment of COVID-19.

Some species of Echinacea, notably E. purpurea, E. angustifolia, and E. pallida, are grown as ornamental plants in gardens. Many cultivars exist, and many of them are asexually propagated to keep them true to type.

Echinacea angustifolia was widely used by the North American indigenous peoples as folk medicine. According to Wallace Sampson, its modern use for the common cold began when a Swiss herbal supplement maker was told that Echinacea was used for cold prevention by Native American tribes who lived in the area of South Dakota. Some Plains tribes did use echinacea for cold symptoms. The Kiowa used it for coughs and sore throats, the Cheyenne for sore throats, the Pawnee for headaches, and many tribes including the Lakota used it as a pain medication.sl:Ameriški slamnik

All content from Kiddle encyclopedia articles (including the article images and facts) can be freely used under Attribution-ShareAlike license, unless stated otherwise. Cite this article:
Echinacea Facts for Kids. Kiddle Encyclopedia.