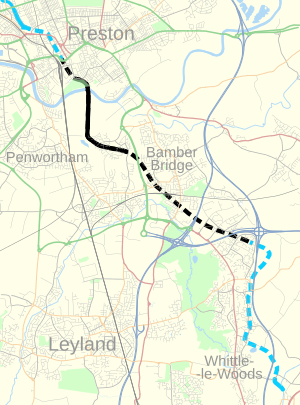 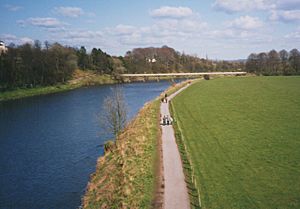 The River Ribble with the tramway bridge in the background

The Lancaster Canal Tramroad, also known as the Walton Summit Tramway or the Old Tram Road, was a plateway, completed in 1803, to link the north and south ends of the Lancaster Canal across the Ribble valley (Barritt, 2000), pending completion of the canal. The canal link was never constructed.

The Lancaster Canal Company obtained an Act of Parliament (32 Geo. III c. 101) in 1792 to construct a canal linking the towns of Kendal, Lancaster and Preston to the coalfields around Wigan. Coal was to be the chief traffic northwards and limestone southwards. Most of the canal was completed quickly, including the impressive aqueduct across the River Lune near Lancaster, but the part across the wide valley of the River Ribble remained to be built when the construction capital became exhausted.

The original plan foresaw an impressive stone aqueduct across the river and up to 32 locks to complete the route. As a temporary measure, the canal company constructed a tramroad to link the two halves and allow revenue traffic to start flowing. Construction took three years.

In 1794, the canal company engaged the services of William Cartwright, first to supervise the construction of the foundations for the Lune Aqueduct and later as Resident Engineer. John Rennie and William Jessop were the chief engineers to the company, but such was the demand for their services at this time of Canal Mania that they were much in demand elsewhere and Cartwright was solely responsible for the construction of the tramroad. His house in Preston is still extant and now forms the façade of a new shopping arcade.

The five-mile-long tramroad comprised a double-track plateway, except for a short section of single track through a tunnel under Fishergate in Preston, just south of the canal basin. The iron rails were ‘L’ shaped in section and were spiked to large limestone blocks. The wheels on the wagons were not flanged and it was the vertical section on the iron rails that kept the wheels on the track. The gauge was 4 foot 3 inches (1295 mm) between the verticals, which were on the inside of the track.

The wagons were pulled by horses, up to six at a time, and each wagon had a capacity of two tons. Originally there were three inclined planes where the wagons were hauled via stationary steam engines and a continuous chain. 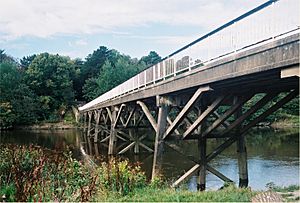 The 1960s replica bridge across the Ribble

The tramroad crossed the River Ribble on a timber trestle bridge. This structure outlived the tramroad by nearly one hundred years and was replaced by a precast concrete structure to the same design in the 1960s.

There were many accidents during the life of the tramroad, many involving the inclined planes with wagons running away.

As was common on early ‘railway’ systems, the wagons could be privately owned by the hauliers themselves (known locally as halers) who paid the company a toll to use the tramroad. The last haler to work the tramroad, John Procter, walked the 10-mile return journey twice a day for 32 years. It has been estimated that he walked or rode nearly 200,000 miles (300,000 km) during his career on the tramroad, and needed his clogs resoling once per week.

In 1813, estimates were prepared to replace the tramroad by a canal but the cost of £160,000 was too much for the company at the time. In 1831 the coming of the Preston and Wigan Railway sounded the death knell for the tramroad and proposals were made to convert it into a railway or amalgamate with the new railway company. This never happened and the tramroad became embroiled in the railway politics of the day. 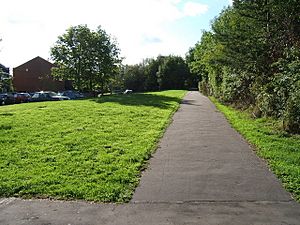 Although the North Union wanted to close the tramroad immediately the canal company objected and they were forced to maintain it in an increasingly decrepit state until the Lancaster Canal Transfer Act of 1864 provided for the canal north of Preston to be leased in perpetuity to the railway and that south of Walton Summit to be leased to the Leeds and Liverpool Canal. The Act also allowed closure of the tramroad between Preston and Bamber Bridge.

In 1872, a land exchange between Preston Corporation and the railway saw the formation between Preston and Carr Wood pass into municipal ownership. This part, including the tramroad bridge over the River Ribble, was turned into a footpath, which remains to the present day.

A further Act in 1879 enabled the last part of the tramroad between Bamber Bridge and Walton Summit, to be closed. The north end of the canal was eventually sold to the London & North Western Railway and the Lancaster Canal Company was wound up at the beginning of 1886. 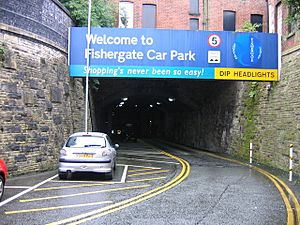 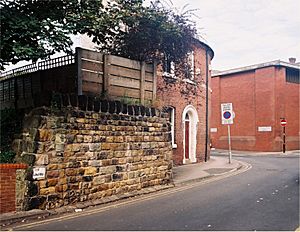 Remains of the bridge over Garden Street in Preston

A well-preserved section of track from the south side of the McKenzie Inn on Station Road in Bamber Bridge was taken up and relaid in Worden Park in Leyland. Plates and stone sleepers are in South Ribble Museum in Leyland and the Harris Museum in Preston. The Harris Museum also has a model of a wagon and a wheel and axle of a wagon recovered from the bed of the River Ribble (Clegg et al., 2001). They had lain there since an accident involving the failure of the endless chain on the Avenham Incline, which caused a train of wagons to run away and plunge into the river at the bottom.

A later (>1885?) enlargement of the tunnel under Fishergate (Moss, 1968) continues in use for vehicle access to the Fishergate Shopping Centre car park - it formerly accessed the Lancashire and Yorkshire Railway's Butler Street goods yard (Biddle, 1989). Part of a support for a bridge over Garden Street remains. A path on the northern edge of Avenham Park follows the route of the tramway, down the Avenham Incline and across a footbridge over the River Ribble on the site of the original trestle bridge. The footpath continues along the flood plain embankment to the Penwortham Incline.

All content from Kiddle encyclopedia articles (including the article images and facts) can be freely used under Attribution-ShareAlike license, unless stated otherwise. Cite this article:
Lancaster Canal Tramroad Facts for Kids. Kiddle Encyclopedia.