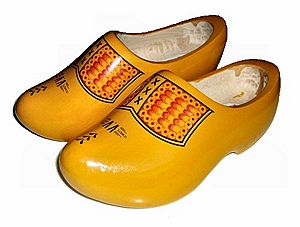 Clogs are a type of footwear made in part or completely from wood. Clogs are used worldwide and although the form may vary by culture, within a culture the form often remained unchanged for centuries.

Traditional clogs remain in use as protective footwear in agriculture and in some factories and mines. Although clogs are sometimes negatively associated with cheap and folkloric footwear of farmers and the working class, some types of clogs are considered fashion wear today, such as Swedish träskor or Japanese geta.

Clogs are also used in several different styles of dance. When worn for dancing an important feature is the sound of the clog against the floor. This is one of the fundamental roots of tap. 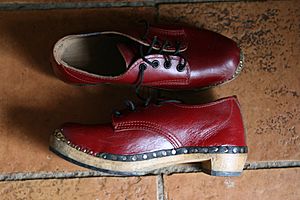 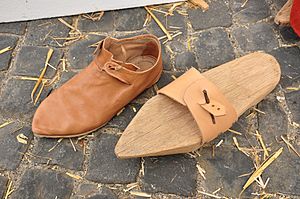 The Oxford English Dictionary defines a clog as a "thick piece of wood", and later as a "wooden soled overshoe" and a "shoe with a thick wooden sole". Welsh traditional clog maker Trefor Owen identified three main varieties of clogs: wooden upper, wooden soled and overshoes.

These divisions are not fixed: some overshoes look more like whole foot clogs, like Spanish albarca, whilst other wooden soled clogs raise and protect clothing in the way that overshoes do, such as Japanese geta.

Since wooden footwear was a hand-made product, the shape of the footwear, as well as its production process showed great local and regional diversity in style. At the beginning of the 20th century machine-made wooden footwear was introduced. After WW2, in particular, wooden shoes disappeared from sight. They were replaced by more fashionable all-leather and synthetic footwear.

In the 1970s and 1980s, Swedish clogs became popular fashion accessories for both men and women. They were usually worn without socks and were considered suitable attire for the avant-garde man. Men wearing clogs sock-less exuded a stunning and virile look that flourished among college campuses.

In the 1980s and 1990s clogs based on Swedish clogs returned in fashion for women. Platform clogs or sandals, often raised as high as 6 or even 8 inches right through between sole and insole, were worn in many western countries.

All content from Kiddle encyclopedia articles (including the article images and facts) can be freely used under Attribution-ShareAlike license, unless stated otherwise. Cite this article:
Clog (shoe) Facts for Kids. Kiddle Encyclopedia.