Laurens is a city in Laurens County, South Carolina, United States. The population was 9,139 at the 2010 census. It is the county seat of Laurens County.

Located in the Upstate region of South Carolina, the city of Laurens is named after Henry Laurens of Revolutionary War fame. It is part of the Greenville–Mauldin–Easley Metropolitan Statistical Area.

The first inhabitants of Laurens were the Cherokee Indians. They used the land as their hunting and fighting ground. There has been evidence of broken potsherds, weapons, and a mound found linked to Cherokee culture on land now called Laurens. There were many treaties made with the Cherokee Indians over the land known as Laurens County dating back to 1721. Before the America Revolution thousands of immigrants, mainly from Scotland and Ireland, settled in Laurens County. Later Laurens developed into a major intersection of commerce in the colonial America. In the Battle of Musgrove Mill, Laurens witnessed intense fighting.

In 1790, after the Revolutionary War, Laurens was elected as the county seat. Like other southern towns, cotton was the major crop being produced. The high amount of cotton production led to an economic boom and a substantial increase in the African American population. The economic boom attracted wealthy entrepreneurs and businessmen to Laurens. Andrew Johnson, 17th President of the United States, worked as a tailor downtown Laurens from 1824 until 1826.

The years after the Civil War, Reconstruction, the economy of Laurens evolved to include industry. The recovery of Laurens' economy was dependent upon the creation of the textiles and manufacturing industry after the civil war. In 1895, Lauren Cotton Mill was founded, and Watts Mill was started in 1902. Laurens Glass Company was established 1910, which was one of the largest glass plants in the southeast for over eighty years. The Laurens Railroad Company was chartered in 1847. The Columbia-Newberry-Laurens Railroad and the Charleston-Western Carolina Railroad are the two major intersections provided by the railroad. 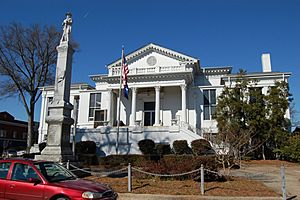 The textile, manufacturing, and glass industries were at one point a major source of employment. Although many of the textile plants and the glass production facilities have closed over the last 30 years, a variety of industries exist within the county, including corporations like CeramTec, International Paper, Milliken & Co. and others. Walmart operates a distribution center outside of the city near Interstate 385, which serves as a major employer. The area has seen several recent economic retail developments, and is seeing new capital investment in heavy industry, including a major new transmission production facility for German ZF Group. The unemployment rate, as of February 2012, sat at 9.6%.

Laurens was the town chosen for a makeover in the second season of Town Haul.

Laurens is home to Gary Davis and Pink Anderson, acoustic blues musicians who were born in the city, as well as Redtop Davis, lightweight boxer of the 1940s and 1950s. J.T. Taylor, the lead singer of the funk/R&B band Kool & The Gang, grew up in Laurens.

Laurens’ church district has two historic churches, which are located on Caroline Street. Bethel AME Church is one of the historic churches in the district. Columbus White, a former slave and builder, designed the church in 1910. But the first church structure was built in 1868. In 1877, Saint Paul First Baptist, which neighbors Bethel AME Church, was established. Columbus White also built Saint Paul First Baptist in 1912. The church is styled in Gothic Revival. The church also served as the county’s first African American public school until 1937.

The West Main Street District is where most of the historical houses are located. The Watts-Todd-Dunklin House was built in 1812. Washington Williams built the house as a wedding gift for his daughter, Nancy. His daughter married James Watts. In 1843, Nancy sold the property to Samuel Todd. The Todd family has owned the house for about one hundred years. The house is registered on the National Register of Historic Places.

In 1859, Colonel John Drayton Williams built the Williams-Ball-Copeland House. The house has an Italian Villa architectural design. Over the past two centuries, several families have owned the house. The South Carolina Baptist Ministries for the Aging bought the house in 1970.

Another historic house registered on the National Register of Historic Places is the Charles H. Duckett House, which is located right off of West Main Street. The house was built in 1892. The owner of the house, Charles Duckett, was a freedman who owned a retail lumber business and was a member of the Bethel AME Church.

The John Calvin Owings House is one of the landmarks in Laurens. In 1896, George F. Barber designed the house, which is characterized by its gingerbread details and turrets. The Edna Poole House is also located on West Main Street, and it is designed in the Art Deco style. Home Magazine and World’s Fair in Chicago featured the Edna Poole House.

The Octagon House is one of the two octagonal buildings in South Carolina. Between 1850 and 1859, Reverend Zelotes Lee Holmes built the house. The design and architecture are accredited to the brother of the builder who was an engineer. Reverend Zelotes Lee Holmes was a Presbyterian minister and educator in Laurens. The Octagon House, A Home for All by Orson Fowler was published in 1853 was based upon the construction of the house. The house was sold to the Holmes family after the death of Reverend Holmes in 1885.

According to the United States Census Bureau, the city has a total area of 10.6 square miles (27 km2), all of it land.

Laurens has a lending library, the Laurens County Public Library.

All content from Kiddle encyclopedia articles (including the article images and facts) can be freely used under Attribution-ShareAlike license, unless stated otherwise. Cite this article:
Laurens, South Carolina Facts for Kids. Kiddle Encyclopedia.