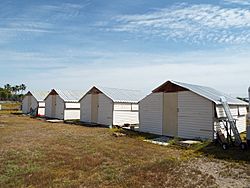 These Japanese Internment Camp Houses were once located in Leupp. These houses were relocated to the grounds of the Sahuaro Central Railroad Museum in Glendale, Arizona.

Leupp loop (Navajo: Tsiizizii) is a census-designated place (CDP) in Coconino County, Arizona, on the Navajo Nation, United States. The population was 951 at the 2010 census.

In 1902 an Indian boarding school was constructed here, administered by the Bureau of Indian Affairs. It had been closed before the US entry into World War II. In 1942 the facility was converted for use as the Leupp Isolation Center, designed to detain Japanese and Japanese-American internees from the several larger internment camps established by the War Relocation Authority to hold citizens and immigrants from the West Coast. They were sent here if characterized as troublemakers; some were men trying to regain their rights as American citizens.

The Bureau of Indian Affairs established a school in Leupp in 1902. The town's name is pronounced LOOP. Soon afterward, the school was moved to a new location known as Old Leupp. Old Leupp is a few miles to the southeast of Leupp. Later in 1907, Leupp became the headquarters of the Leupp Indian Land. It was one of five Navajo Indian Lands that existed before 1936.

In 1942, Philip Johnston, who was raised 12 miles North of Leupp as a young boy, proposed the idea of having the Navajo language be used as a code in World War II against the Japanese. The code which was unbreakable until the US government released the top secret files, helped U.S in the war. Its significances is that the Navajo language is so complex with its dialect and sentence structure that it would take 2 1/2 minutes to successfully translate and transmit and then re-translate the message, which would take hours for a regular soldier to complete. Had it not been for the surrounding communities like Leupp and Flagstaff, Johnson probably would have never been here to interact with the Navajo people and learn the language. Therefore, the Navajo code talkers would not have existed and would not be there to help US win the war.

During World War II, an abandoned Bureau of Indian Affairs boarding school in Leupp was used as the Leupp Isolation Center, for Japanese American internees considered to be "troublemakers" by camp authorities. The first inmates were transferred from Manzanar by way of Leupp's predecessor, the Moab Isolation Center. After a December 1942 clash between camp guards and several hundred Japanese American internees, in which two prisoners were killed, nine prisoners and one guard injured, the 16 men who had instigated the protests were removed from camp and placed in surrounding town jails. While they waited in jail (without being charged with a crime or allowed a hearing) War Relocation Authority officials converted a former Civilian Conservation Corps camp outside Moab, Utah into a temporary isolation center for "noncompliant" Japanese Americans. The 16 men from Manzanar arrived in Moab on January 11, 1943. Over the next three months, another 25 "troublemakers" — mostly men who had resisted the WRA's attempts to assess the loyalty of incarcerated Japanese Americans — were brought to Moab, and on April 27 most of the population was transferred to Leupp. (Five men, serving sentences in the nearby county jail after protesting conditions in the isolation center, were transported to Leupp in a five-by-six-foot box on the back of a truck. Their separate transportation was arranged by Moab director Francis Frederick, who had also handed down their sentences for "unlawful assembly.")

The 49 transfers from Moab were eventually joined in Leupp by additional internees from Tule Lake, Topaz and other camps. Leupp housed a population of approximately 50-60 prisoners at a time, with a total of 80 Japanese Americans passing through the isolation center while it was in operation. The 52 inmates then residing in Leupp were transferred to the stockade at Tule Lake (converted to a segregation center for "disloyal" Japanese Americans earlier that year) on December 2, 1943. The camp technically remained open, retained with minimal maintenance, until September 20, 1944, when the site was returned to Department of the Interior authority.

In 1910, Mr. John Walker built the Leupp Trading Post out of quarried sandstone at the newly established community now called "Old Leupp", when the BIA began building its agency there. By 1912, Mr Walker sold the post to an unknown party.

Today, the Leupp Trading Post is defunct, the building dismantled, with nothing remaining other than the foundation.

According to the Köppen Climate Classification system, Leupp has a semi-arid climate, abbreviated "BSk" on climate maps.

There were 228 households, out of which 54.8% had children under the age of 18 living with them, 57.9% were married couples living together, 29.8% had a female householder with no husband present, and 9.6% were non-families. 9.2% of all households were made up of individuals, and 0.9% had someone living alone who was 65 years of age or older. The average household size was 4.25 and the average family size was 4.53.

Leupp is zoned to schools in the Flagstaff Unified School District (FUSD). It operates Leupp Public School here, a K-5 elementary school. As of 2018[update] all of the students are Native American. In addition to Leupp, its attendance zone includes Birdsprings and Tolani Lake. The sole FUSD school in the Navajo reservation, it previously served as a K-8 school. Grades 6–8 are now served by another school.

According to Mitch Strohmann, the public relations official at FUSD, this school had "made some amazing strides in recent years."

Construction on the current campus was scheduled to start in summer 2002. Within the campus, which had a cost of $2.8 million, is a hogan that was dedicated in January 2002. FUSD consulted with the school community on the design of the school.

Leupp Schools, Inc. is a tribally controlled boarding school located here. The Navajo Nation manages and operates it under contract to the Bureau of Indian Education (BIE), which funds it.

All content from Kiddle encyclopedia articles (including the article images and facts) can be freely used under Attribution-ShareAlike license, unless stated otherwise. Cite this article:
Leupp, Arizona Facts for Kids. Kiddle Encyclopedia.