The San Francisco Peaks (Spanish: Sierra de San Francisco, Navajo: Dookʼoʼoosłííd) are a volcanic mountain range in San Francisco volcanic field in north central Arizona, just north of Flagstaff and a remnant of the former San Francisco Mountain. The highest summit in the range, Humphreys Peak, is the highest point in the state of Arizona at 12,633 feet (3,851 m) in elevation. The San Francisco Peaks are the remains of an eroded stratovolcano. An aquifer within the caldera supplies much of Flagstaff's water while the mountain itself is in the Coconino National Forest, a popular recreation site. The Arizona Snowbowl ski area is on the western slopes of Humphreys Peak, and has been the subject of major controversy involving several tribes and environmental groups. 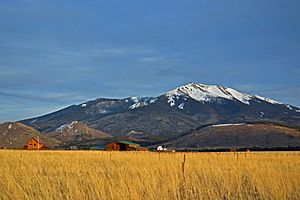 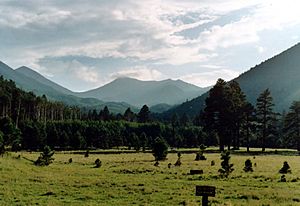 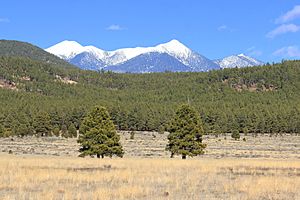 The San Francisco Peaks as seen from Bellemont, Arizona, Winter 2014.

The six highest individual peaks in Arizona are contained in the range:

The mountain provides a number of recreational opportunities, including wintertime snow skiing and hiking the rest of the year. Hart Prairie is a popular hiking area and Nature Conservancy preserve located below the mountain's ski resort, Arizona Snowbowl.

Prior to its collapse due to a lateral eruption to the northeast (around 200,000 years ago) and subsequent glacial erosion, the San Francisco Peaks fully matured elevation is estimated to have been around 16,000 feet (4,900 m).

In 1629, 147 years before San Francisco, California, received that name, Spanish friars founded a mission at a Hopi Indian village in honor of St. Francis, 65 miles from the peaks. Seventeenth century Franciscans at Oraibi village gave the name San Francisco to the peaks to honor St. Francis of Assisi, the founder of their order. The mountain man Antoine Leroux visited the San Francisco Peaks in the mid-1850s, and guided several American expeditions exploring and surveying northern Arizona. Leroux guided them to the only reliable spring, one on the western side of the peaks, which was later named Leroux Springs.

Around 1877, John Willard Young, a son of the Mormon leader Brigham Young, claimed the area around Leroux Springs, and he built Fort Moroni, a log stockade, to house railroad tie-cutters for the Atlantic & Pacific Railroad, which was then being built across northern Arizona.

In 1898, U.S. President William McKinley established the San Francisco Mountain Forest Reserve, at the request of Gifford Pinchot, the head of the U.S. Division of Forestry. The local reaction was hostile—citizens of Williams, Arizona, protested and the Williams News editorialized that the reserve "virtually destroys Coconino County." In 1908, the San Francisco Mountain Forest Reserve became a part of the new Coconino National Forest.

In 2002, Arizona Snowbowl, the ski resort on the peaks, proposed a plan to expand and begin snowmaking using reclaimed water made of treated sewage effluent. A coalition of Indian tribes and environmental groups sued the Coconino National Forest, which leases the land to the ski resort, in an attempt to stop the proposed expansion, citing serious impacts to traditional culture, public health, and the environment. In 2011, construction began on a wastewater pipeline to the peaks. In response, there has been an ongoing series of protest actions including demonstrations and lockdowns in which protesters have chained themselves to construction equipment. Notable protesters include Navajo musician Klee Benally, singer/guitarist for the punk rock band Blackfire, who has been arrested for disorderly conduct during his ten years of protests. In 2012, a federal appeals court ruled in favor of Arizona Snowbowl, and wastewater to snow conversion began in the 2012–2013 ski season.

The biologist Clinton Hart Merriam studied these mountains and surrounding areas in 1889, describing a set of six life zones found from the bottom of the Grand Canyon to the summit of the mountains, based on elevation, latitude, and average precipitation. He designated their characteristic flora, as follows: 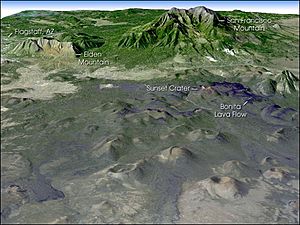 Composite image of the Peaks and the San Francisco volcanic field, looking SW towards Flagstaff. NASA image from satellite imagery projected onto a digital elevation model.

Merriam considered that these life zones could be extended to cover all the world's vegetation types with the addition of only one more zone, the tropical zone.

The San Francisco Peaks have considerable religious significance to thirteen local American Indian tribes (including the Havasupai, Navajo, Hopi, and Zuni.) In particular, the peaks form the Navajo sacred mountain of the west, called Dookʼoʼoosłííd. The peaks are associated with the color yellow, and they are said to contain abalone inside, to be secured to the ground with a sunbeam, and to be covered with yellow clouds and evening twilight. They are gendered female. 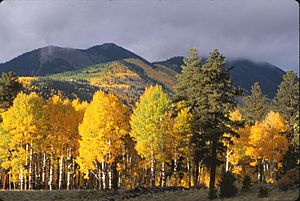 For the Hopi people, the San Francisco Peaks are associated with the intercardinal direction southwest. They constitute ritually pure sacred spaces, and are used as sources for ceremonial objects. The alignment of the sunset from the peaks to Hopi villages on Black Mesa is used to calculate the winter solstice, signifying “the beginning of a new year, with a new planting season and new life”. The peaks are seen as the home of the katsinam or kachina spirits, ancestors who have become clouds following their death. Katsinam are invited to Hopi villages to serve as ethical and spiritual guides to the Hopi community from midwinter to midsummer. Aaloosaktukwi or Humphrey's Peak holds particular religious significance and is associated with the deity Aaloosaka, a symbol of the Two-Horn Society, a religious group among the Hopi dating to the occupation of the Awat’ovi village on Antelope Mesa. Depiction of the peaks in association with calendar-keeping is attested in a kiva at the Hisatsinom settlement of Homol'ovi, which was occupied from 1250 to 1425; katsinam imagery dates to the 13th century as well. Other Native American peoples also relate kachina spirits to heavy snowfalls on the peaks.

There are several names for the San Francisco Peaks in local languages:

All content from Kiddle encyclopedia articles (including the article images and facts) can be freely used under Attribution-ShareAlike license, unless stated otherwise. Cite this article:
San Francisco Peaks Facts for Kids. Kiddle Encyclopedia.